Review – The Lost and Found Bookshop by Susan Wiggs 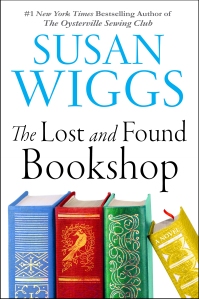 In this thought-provoking, wise and emotionally rich novel, New York Times bestselling author Susan Wiggs explores the meaning of happiness, trust, and faith in oneself as she asks the question, “If you had to start over, what would you do and who would you be?”

Somewhere in the vast Library of the Universe, as Natalie thought of it, there was a book that embodied exactly the things she was worrying about.

In the wake of a shocking tragedy, Natalie Harper inherits her mother’s charming but financially strapped bookshop in San Francisco. She also becomes caretaker for her ailing grandfather Andrew, her only living relative—not counting her scoundrel father.

But the gruff, deeply kind Andrew has begun displaying signs of decline. Natalie thinks it’s best to move him to an assisted living facility to ensure the care he needs. To pay for it, she plans to close the bookstore and sell the derelict but valuable building on historic Perdita Street, which is in need of constant fixing. There’s only one problem–Grandpa Andrew owns the building and refuses to sell. Natalie adores her grandfather; she’ll do whatever it takes to make his final years happy. Besides, she loves the store and its books provide welcome solace for her overwhelming grief.

After she moves into the small studio apartment above the shop, Natalie carries out her grandfather’s request and hires contractor Peach Gallagher to do the necessary and ongoing repairs. His young daughter, Dorothy, also becomes a regular at the store, and she and Natalie begin reading together while Peach works.

To Natalie’s surprise, her sorrow begins to dissipate as her life becomes an unexpected journey of new connections, discoveries and revelations, from unearthing artifacts hidden in the bookshop’s walls, to discovering the truth about her family, her future, and her own heart.

Natalie Harper has just attended her company’s celebration of her promotion, but she’s feeling very empty and unfulfilled.  Neither her mother, nor her boyfriend attended, and she overhears her co-workers make some very unflattering remarks about her.  Truth be told, she hates her job, and is totally sticking with it for the money and security, something which was severely lacking in her growing up years.  If she’s being completely honest, her romantic relationship doesn’t feel right either.  When Natalie learns the tragic reason her mother didn’t attend, she rushes to be with her elderly grandfather, and her childhood home, the Lost and Found Bookshop.

After dealing with the memorial service, and while still grieving, Natalie digs into the financial state of the store, only to find that her mother has been hanging on by a shoestring, and is heavily in debt.  Even using her own money, Natalie sees no way to recover, and reluctantly tells her grandfather, Grandy, that they will have to sell.  But while the book store was her mother’s, the actual building belongs to Grandy, and he flat out refuses to sell.  The building has historical ties to his ancestors, going back to the turn of the 20th century, and Grandy still believes the family legend of “treasure” hidden somewhere within its walls.

Natalie loves Grandy dearly, as he was her only father figure while growing up.  Now that he’s in the beginning stages of dementia, as well as in poor health, Natalie is torn over whether she needs to take legal steps, knowing that it will break his heart.  She decides to leave her safe job and move back permanently to try to make a go of the store.  Natalie truly pours her heart and soul into the bookshop, adding a café and scheduling author events.  She hires a contractor to begin much needed building repairs, and miraculously, one of the most successful authors around comes to her shop, willing to be part of a huge event.

I found THE LOST AND FOUND BOOKSHOP to be a beautifully written, poignant, emotional, and captivating read.  Natalie’s grief was so brutal and honest, that I could feel it coming off the pages.  Grandy’s own grief over the loss of his daughter, as well as his realization that he was slowly losing himself tugged at my heart.  The uncertain future, the actual discovery of various treasures, and Natalie’s opportunity for a new love were depicted sympathetically and realistically.  Natalie has two men interested in her, the contractor, Peter Gallagher, known as “Peach,” and the wealthy author, Trevor Dashwood, both good men who genuinely care for her.  Natalie steps into romance cautiously, but eventually finds her happiness.  THE LOST AND FOUND BOOKSHOP is a wonderful story, with plenty of emotion and character depth, one that I heartily recommend to readers who love romance, women’s fiction, and family fiction.    ~Rose