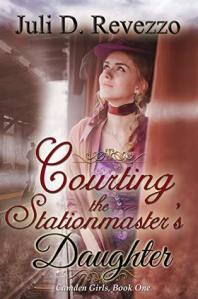 After Honorine Camden is jilted, leaving her stunned and sparking a scandal in her tiny London borough of Wallflower, she’s devastated. But when she overhears her father, the stationmaster, talking about arranging a party for their newly-minted underground railway station, she volunteers to help. Although she’s intrigued with the handsome assistant stationmaster, Shane MacIntyre, she never expects to fall head-over-heels in love with him. Unfortunately, one tragic accident might derail everything.

Honorine Camden is currently suffering the hurt pride and some social backlash from being jilted by her fiancé, Gerald Latimore, a year ago.  It seems that Gerald had a roving eye, among other unruly parts, and decided to dally with another woman.  Since then, Honorine has focused on trying to enter a botany program at college, a not so easy feat in 1879.  Though still smarting from Gerald’s rejection, Honorine can’t help but notice the handsome man who is being groomed to be the replacement for her father as stationmaster, when that gentleman retires.

Shane MacIntyre is lucky to work for a man who supports and encourages him at the Wallflower Subway Station.  Being half Irish and half Scots, Shane still is the victim of prejudice from many who look down on the Irish.  He notices Honorine every time she comes to visit her father, and would definitely like to court her.  While Mr. Camden appears to approve, and even promote, Shane’s becoming better acquainted with Honorine, his wife does not concur.  Mrs. Camden takes it upon herself to discourage Shane by some not so subtle insults and actions.

As Shane and Honorine are thrown together (thanks to her father’s machinations) to plan a function for the station’s employees, they become closer and more infatuated with each other.  Though the main focus of COURTING THE STATIONMASTER’S DAUGHTER is the developing romance between Shane and Honorine, there are some other facets to the story – Shane’s strained relationship with his father, the truth about Gerald’s jilting of Honorine, and the activities happening at a subway station, including the horrific tragedy when something goes wrong.  Both lead characters are good, solid people to root for.  Even the people initially appearing villainous turn out to be not quite so awful, after all.  COURTING THE STATIONMASTER’S DAUGHTER is a gently paced book, which I believe will appeal to readers who enjoy a sweet and slow building romance with lots of historic detail.    ~Rose