Review – The Matter of a Marquess by Jess Michaels 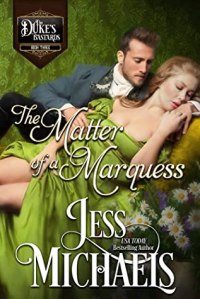 Viscountess Aurora Lovell has been in love with one man her entire life, but life intruded and never allowed her to be with him. She came to accept it, marrying for title rather than love. Now a widow, she’s busy trying to figure out how to manage a scandal about to destroy her world when she is invited to a country party. Desperate to escape the realities of her life, she accepts.

Nicholas Gillingham has always lived his life between two worlds. Raised by a servant, but secretly the bastard son of the infamous Duke of Roseford, he never felt he belonged. Injured saving others, he is now a war hero and improbably in line to be gifted a title for his service. A way to never feel so helpless as he did when he lost Aurora the first time. But to influence the right people, he needs his brother’s help and finds himself at a country party.

Time and distance mean nothing when Aurora and Nicholas meet again. But can they overcome a tangled past filled with bitter betrayal, a scandal that could ruin the future AND a very intrusive dog in order to find their way back to each other? Or will love be just as painful the second time around?

Nicholas Gillingham grew up believing his father to be the man who raised him, the man-of-affairs for the Earl of Bramwell.  He eventually learns that he is, in fact, the natural son of the Duke of Roseford, and Mr. Gillingham married his mother, and raised him as his own.  Nicholas grew up with the earl’s children, becoming best friends with his son, and falling in love with his daughter.  Aurora returns his affection, and suggests that they elope, knowing her father will never approve a match between the two.  Nicholas, however, is always honorable, and decides to do things the right way and approach the earl directly, to ask for her hand in marriage.  The earl has been well aware of the connection between his daughter and his servant’s son, and is ready to stop things before they go any further.  The meeting with the earl is humiliating for Nicholas, as well as painful, as Aurora’s father advises Nicholas that she is engaged.  He even takes Nicholas to see Aurora walking and smiling in the garden with her soon-to-be husband.  Heartbroken and ashamed of his birth, Nicholas immediately joins the army, where he served for nine years, coming home injured, yet a hero.  He’s also in line to be awarded a title, something he craves very badly, something that will give him the power he’s lacked all of his life.

Aurora is stunned when Nicholas suddenly disappears, and she learns that he left to join the army without a word to her.  Pressured by her father, she weds Viscount Lovell, an unhappy union that lasts several years, until he turns up dead in embarrassing circumstances.  Aurora was left only a pittance to live on, and she and her friend, Imogen, another widow, struggle to make ends meet.  When Imogen decides to take the plunge and become a lady of the evening, Aurora goes searching for her.  Of course, Aurora is spotted in a brothel, and of course it’s not kept quiet, and of course she is ruined, no matter the circumstances.  When a kindly duchess invites Aurora to an upcoming house party, hoping to alleviate some of the scandal, Aurora accepts.  The thing is, the duchess is married to the current Duke of Roseford, Nicholas’s half brother, and he’s also invited Nicholas, so that he may lobby those who have some input as to whether he is awarded his much coveted title.

The late duke of Roseford was a true libertine and scoundrel, taking any woman he wanted and not caring how many illegitimate children he sired.  For a while, it seemed that his heir, Robert, would follow in his footsteps.  But Robert turned his life around, and found love and happiness.  He also was determined to find all his illegitimate half siblings and make them a part of his family.  He has already developed a relationship with Morgan and Selina, but Nicholas is hard to get close to.  Nicholas is torn between accepting the affection offered by his half siblings, and keeping his distance and his walls up.  He can’t refuse Robert’s offer to help him achieve his title, though, and he’ll even endure the house party, if he must.  As he joins Robert to greet the arriving guests, he is shocked to see Aurora step from the carriage.

Both Nicholas and Aurora are initially dismayed and troubled at seeing each other for the first time in nine years.  Each believes the other to blame for their parting, and each had done their best to move on.  Though they were both young, it appears that their love never died, and try as they may, they can’t stay away from each other.  I love a good second chance at love story, and the thing I liked best about THE MATTER OF A MARQUESS is that after the initial shock of meeting again, Nicholas and Aurora talked.  They didn’t skirt around the issue of their past, and their conversations finally led them to the truth of those who really betrayed them.  While their love is still burning strong, now with an undeniable passion, Aurora realizes that her social ruin has made a match between them impossible.  If it’s known that he’s courting her, his chances of obtaining the title he desires so badly are nil.  At the same time, Aurora still seeks her missing friend, Imogen, and the trail leads to yet another child fathered by the dissolute late Duke of Roseford.  I totally understood and sympathized with the character of Nicholas, and how he chose to deal with the life he was dealt.  His reserve was not because he felt too little, but because he was afraid of feeling too much and getting hurt again.  THE MATTER OF A MARQUESS is Book Number 3 in the Duke’s Bastards series, but can easily read as a standalone.  It’s a steamy and fast paced read that I greatly enjoyed, and is bound to appeal to readers who crave star-crossed lovers, and a sweet second chance at love.    ~Rose