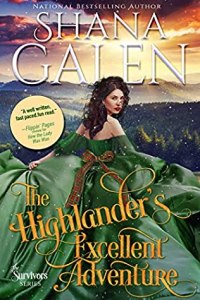 Just because they’ve run away…
Ines Neves and Emmeline Wellesley have both run away. Ines hid in a carriage from a tedious suitor, only to find, too late, the carriage had traveled out of London, not just around the block. To make matters worse, the carriage is that of a stranger: a handsome Highlander. Or perhaps a big, strapping Highlander makes matters better? Emmeline Wellesley has had four Seasons and cannot tolerate another. To force her mother to listen to her, she’s run away. But things haven’t gone well. She’s been locked in a closet, had all her money stolen, and somehow adopted a dog. When an old family friend shows up to save her, she doesn’t exactly welcome his help.

Doesn’t mean they don’t want to be found.
Duncan Murray doesn’t know what to make of the Portuguese-speaking woman in his carriage. She refuses to return to London, so he takes her to meet Nash Pope, a so-called friend who speaks Portuguese. On the way, he meets up with former soldier Stratford Fortescue and Stratford’s opinionated distant cousin, Miss Wellesley. The four travel together to Nash’s estate, and that’s when everything goes really wrong. On the run to Scotland, Duncan finds himself increasingly attracted to Ines, even though he knows he can never marry her. Stratford has always wanted Emmeline, but his family secret means he doesn’t deserve her. This excellent adventure might bring the couples together, but only if they manage to elude gun shots, a murderous brother-in-law, a vicious dog, and outlaws.

A road trip adventure, and two romances for the price of one — I’m all in!

Ines Neves is tired of her well intentioned sister and brother-in-law trying to match her up with dull, staid gentlemen.  She longs for passion and adventure, someone like the tall, handsome highlander she’s been longing for from afar.

Duncan Murray, former soldier, has been unsuccessful in trying to find an English bride to take home with him to Scotland.  All the proper young ladies seem to fear him, or feel that he’s beneath them, so he’s heading home alone.

Emmeline Wellesley is tired, and unwilling to face another season.  Her younger sisters harp on her for not getting married and giving them a chance, while her mother constantly tries to change her into a quiet, thin, proper society lady.

Stratford Fortescue, also a former soldier and friend of Duncan’s, has never been able to please his distant and disapproving father, or gain the true affection of his family.

When Ines overhears that another unwanted suitor is about to call on her, she decides to hide out in his own carriage, then later sneak away.  Unfortunately, the carriage she slips into is not her suitor’s, but Duncan’s.  He has come to bid his friends farewell before returning home.  Coming back to his carriage, he decides to ride outside with his coachman, never realizing he has an unwanted passenger.  Before Ines is discovered, they are well on their way to the north.  When Duncan finally decides to ride inside, they are shocked to see each other, and Ines is initially speechless.  Discovering that her traveling partner is the man she has secretly been observing, she boldly decides to let this adventure take her wherever it may.  She pretends not to speak English, thus leaving Duncan at loose ends as to how to handle the situation.  When they stop at an inn for the night, they encounter unexpected fellow travelers.

Emmeline has finally had enough, and decides to run away, at least for the remainder of the season, perhaps to stay with a distant relative.  Her impulsive flight isn’t very well planned, and she hops on the first coach available.  Her naiveté leads to her being fleeced, leaving her moneyless.  Stratford’s family and Emmeline’s are close, and when he learns of her flight, he takes off in pursuit.  Stratford has known Emmeline since they were children, and has loved her since they have become adults, though she’s totally unaware of it.  Emmeline is outspoken and somewhat testy, but she could always count on Stratford to be her escort or dancing partner.  Stratford knows that his love isn’t returned, but even if it were, he is hiding a shameful secret that renders him unsuitable as a match.  Emmeline is not pleased to see Stratford now, and refuses to return home with him.  They decide to stop at the same inn where Duncan and Ines are, and agree to continue together the next morning.

The rollicking road trip that ensues is full of adventure, gunshots, robbers, injury, humor, and, most importantly, romance.  Oh, and along the way, they acquire a dog with a big personality.  As they keep traveling on, all the while being pursued by their former commander, who just happens to be Ines’ brother-in-law, the couples begin to fall in love, but, seemingly hopelessly.  Duncan owes his mother a huge debt, and is obligated to marry according to her wishes.  And she wishes him to marry an English lady of noble birth, not a Portuguese lacemaker.  While it appears that Emmeline is finally seeing Stratford through new eyes, he backs away from her because of that annoying secret.

THE HIGHLANDER’S EXCELLENT ADVENTURE is such a fun and enjoyable read, though it has serious and poignant moments.  I loved all four of the main characters, and the story is told from their alternating points of view, and it works beautifully.  Before there is a pair of happy ever afters, Duncan has to come to terms with an incident in his past, as well as having a long overdue heart-to-heart conversation with his mother, who is not quite as villainous as I first thought.  Emmeline and Stratford both have issues with their own self worth that have to be addressed before the (sort of) friends become lovers.  THE HIGHLANDER’S EXCELLENT ADVENTURE is steamy and delightful, and is Shana Galen at her entertaining best.    ~Rose