Review – The Ballad of Hattie Taylor by Susan Andersen 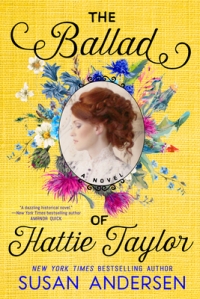 In the small, bustling town of Mattawa, Oregon, the turn of the century offers a new kind of frontier for women: a vast and exciting range of possibilities—to a point. It’s a time for change, and no one is more eager to embrace new paths than free-spirited outsider Hattie Taylor. If only she could embrace Jake Murdock too.

Jake can’t remember a time he was so confused. Hattie is off-limits. The provoking spitfire is under his mother’s protection—his protection—and he has always belonged to another. But now, with the passing of his wife, Jake feels something shift between them. Frustratingly aware of Hattie as a woman, he struggles with new feelings, new questions, new desires.

But when a desperate decision born of good intentions turns out to have ugly repercussions, Hattie confronts a cruel reality she can no longer ignore: the truth of where women really stand and the actions men take to keep them there. To navigate her new world of tainted justice and privileged order Hattie will draw on the strength of the women around her—and Jake will learn what it truly means to support the woman he loves.

CLICK HERE FOR DIRECT AMAZON US BUY LINK: The Ballad of Hattie Taylor

After Hattie Taylor’s mother died, she was raised by her father, and his partner, both miners.  This resulted in Hattie growing up with a colorful vocabulary, as well as not having a clue about how to act as a young lady.  When she turned eleven, her father died, and she was sent to live with distant cousins in Oregon.  Hattie struggled to learn to fit in to her new life, though she did well in school, and soaked up knowledge like a sponge.  Still, her forthright manner didn’t let her have any female friends, and she only had one male friend while growing up.  She came to love her new family, and they, her.  She was particularly fond of Jake, and planned to marry him when she grew up.

Jacob Murdock is a young lawyer and ranch owner.  When he learned that his mother planned to bring orphaned Hattie into their household, he was unsure at first.  From the moment Jake picked Hattie up at the train station, he liked her, and soon grew to love her as a sister.  Her frankness and curiosity amused and entertained him, and Jake was always willing to spend time with Hattie, answering her questions, and giving her advice.  Being eleven years older, Jake didn’t realize that Hattie’s feelings were turning to a crush that would turn into love.  Jake had been courting a local lady, Jane-Ellen, and they married not long after Hattie’s arrival.

Though Hattie had every intention of disliking the woman who captured Jake, she finds Jane-Ellen to be sweet and kind, and the two become fast friends.  What doesn’t work out, however, is Jake’s marriage.  Jake is a very sexual man, who was very disappointed to find his new wife has an aversion to intimacy.  Her coldness in the bedroom is such a contrast from her warmth in every other facet of her personality, and it makes Jake truly miserable, and sends him on a path I found truly disappointing.  Years into their marriage, Jane-Ellen finally becomes pregnant, and they are both ecstatic about the upcoming birth of their child.  Before the child is born, tragedy happens, and the aftermath will set in motion another horrific event which will change Hattie’s life forever.

THE BALLAD OF HATTIE TAYLOR is a departure from what I usually read, as it encompasses the story of Hattie from an eleven year old child to her becoming an adult in her twenties, then giving a glimpse of her even more distant future.  I love her spirit, her strength, and her resilience, as she bounced back time and again from the hard knocks she had to endure.  A particularly devastating event may have wounded her greatly, but she was eventually able to stand up and move on with her life, becoming a successful teacher, earning the respect of the townspeople who formerly looked down on her, and finding the love of her life.  THE BALLAD OF HATTIE TAYLOR is very well written, and held my attention, yet, there was so much tragedy, that I found I couldn’t feel uplifted, even with the happy ever after.  I also found it hard to accept certain acts by the hero, which lessened my pleasure in the book.  I believe that readers who enjoy a coming of age story, and aren’t averse to major traumatic events will enjoy this story which takes place at the beginning of the 20th century.  I am adding an additional paragraph which absolutely contains spoilers for those who may be interested to know what pushed my buttons.  If you do not want that much information, please don’t read the following…    ~Rose

SPOILER ALERT – Rape is a trigger for many readers, and THE BALLAD OF HATTIE TAYLOR contains a brutal attack on the main character by a vile and evil man who believes himself entitled to put every woman in her place.  This action is particularly awful because the hero indirectly was responsible for its occurrence by refusing to listen to Hattie’s fears.  In addition, the hero was repeatedly unfaithful to his first wife, something that made me question his ability to remain faithful to Hattie.  There is also a heartbreaking death of a child, still in the womb.