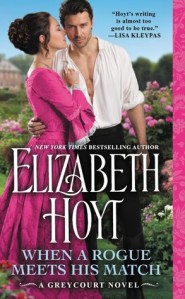 Ambitious, sly, and lethally intelligent, Gideon Hawthorne has spent his life clawing his way up from the gutter. For the last ten years, he’s acted as the Duke of Windemere’s fixer, performing the most dangerous tasks without question. Now Gideon’s ready to quit the duke’s service and work solely for himself. But Windermere wants Gideon to complete one last task, and his reward is impossible to resist: Messalina Greycourt’s hand in marriage.

Witty, vivacious Messalina Greycourt has her pick of suitors. When Windermere summons Messalina to inform his niece that she must marry Mr. Hawthorne, she is appalled. But she’s surprised when Gideon offers her a compromise: as long as she plays the complacent wife, he promises to leave her alone until she asks for his touch. Since Messalina is confident that she’ll never ask Gideon for anything, she readily agrees. However, the more time she spends with Gideon, the harder it is to stay away.

AMAZON US BUY LINK: When a Rogue Meets His Match

Messalina Greycourt is traveling by coach with her sister, when she is abducted by her lowlife uncle’s right hand man.  She is taken to her Uncle Augustus’ home, where she is promptly informed that she will immediately wed Gideon, the very man who kidnapped her and brought her here.  When Messalina informs her uncle that she has no intention of wedding his henchman, Uncle Augustus makes veiled threats toward Lucretia, her younger sister.  Messalina now knows she is in a terrible spot, and may actually have to marry the man to keep Lucretia safe – at least until she can arrange a way for them to escape.

Gideon Hawthorne was born in the slums of St. Giles, and has done whatever it took to remove himself from that life.  He was a champion knife fighter, then became a money lender.  He was eventually hired by Augustus, the Duke of Windemere, to handle his dirty work.  Now, after ten years of working for the duke, Gideon is ready to stand on his own.  He has managed to invest in some coal mines, and wants to get away from the violent business and the vile duke.  Augustus is an extremely clever and observant man, and he knows the one thing that Gideon wants more than any other – his niece, Messalina.  When Augustus offers her in marriage, in exchange for one last job – a task which won’t be revealed until after the wedding takes place – Gideon agrees, never realizing the devil’s bargain he was making.

Messalina has no idea that Gideon wants her so badly, as she avoided him and her uncle over the years whenever possible.  Now she has no choice but to talk with him, and try to understand his motivation for the situation she’s in.  Gideon lets her know that he is determined to marry her, but he also promises her some time before they consummate the marriage.  Messalina is determined to protect Lucretia, and has devised a plan for them to leave and start a new life elsewhere, so she agrees to the wedding.  What she doesn’t expect is the softer side of the virtual stranger she married.  Gideon takes her to his sparsely furnished home, giving her carte blanche to buy whatever she wants. He even agrees to allow Lucretia to live with them.  It seems that the scarred man with the dubious past has a genuine affection for her, leaving Messalina confused and unsure.

While Messalina still intends to leave Gideon, she finds herself being seduced by his loving treatment of her, and they soon make their marriage a genuine physical one – and the relationship is decidedly steamy.  Messalina begins to trust Gideon, and to think that she may not want to leave him after all.  Then Gideon learns the final task he’s agreed to complete for the duke – one that is guaranteed to ensure Messalina will hate him forever.  As Gideon struggles to find a solution, other suspicious and near tragic events happen.  Now Gideon must not only find a way to save his marriage, but to save his and Messalina’s very lives.

WHEN A ROGUE MEETS HIS MATCH is book two of the GREYCOURT series, but it can be read as a standalone, as details of the years ago tragedy have been sparse thus far.  A failed elopement and a tragic death tore three close friends and their families apart.  I’m guessing that details will be revealed in the final book, with just bits and pieces along the way.  I’m OK with this type of series, as long as each couple in their respective book gets their happy ever after.  Gideon is the kind of man I didn’t expect to like – a genuine ruffian who has done plenty of horrible things in his life.  Still, I admire him for trying to get away from that life and to become a legitimate businessman.  I found his love for, and care of Messalina to be stellar, and I was pretty much ready to forgive him anything.  Messalina was also a great heroine, and I loved seeing her soften and show a willingness to take a chance and forgive.  Together they make an unusual, but fantastic couple with a dynamic sexual chemistry.  I became totally invested in this couple, and their evolving romance, which was both sweet and hot, making for a truly satisfying read.    ~Rose

I’m giving away a print copy of When a Rogue Meets His Match with a bonus story by Kelly Bowen included, courtesy of the publisher.  U.S. only, please, due to postage costs.  Just leave a comment below, stating you’d like to win.  Good luck!