The Lady Has a Past by Amanda Quick – Review and Excerpt 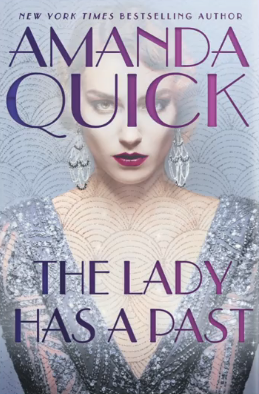 Investigative apprentice Lyra Brazier, the newest resident of Burning Cove, is unsettled when her boss suddenly goes on a health retreat at an exclusive spa and disappears without another word. Lyra knows something has happened to Raina Kirk, and she is the only one who can track her down. The health spa is known for its luxurious offerings and prestigious clientele, and the wealthy, socialite background Lyra desperately wanted to leave behind is perfect for this undercover job. The agency brings in a partner and bodyguard for her, but she doesn’t get the suave, pistol-packing private eye she expected.

Simon Cage is a mild-mannered antiquarian book dealer with a quiet, academic air, and Lyra can’t figure out why he was chosen as her partner. But it soon becomes clear when they arrive at the spa and pose as a couple: Simon has a unique gift that allows him to detect secrets, a skill that is crucial in finding Raina.

The unlikely duo falls down a rabbit hole of twisted rumors and missing socialites, discovering that the health spa is a façade for something far darker than they imagined. With a murderer in their midst, Raina isn’t the only one in grave danger—Lyra is next.

DIRECT AMAZON US BUY LINK: The Lady Has a Past

I should let her go, Raina thought. For her own good. There was an unmistakable aura of naiveté and cheerful innocence about Lyra. The private investigation business was not a good career choice for the naïve and the innocent.

But one thing stopped her from firing Lyra on the spot. Yes, a madman had tried to murder her that day but she had fought off her attacker with a golf club and she had saved herself and the client. She also understood that she had been used. She was no longer quite so naïve or so innocent. She was learning fast.

“You’re right,” Raina said. “Marcella Adlington was certainly very specific about the time of the appointment this afternoon. She was not dressed for swimming or sunbathing yet she insisted you meet her poolside.”

Lyra swung around, hazel eyes sharp and clear. “She had a gun hidden in a stack of towels. The fact that Charles Adlington was dressed for swimming indicates that his presence at the scene was not a surprise to his wife.”

“I found out later that his car was parked in the garage. He had been there for a while. She must have told him she planned to hire a private investigator to try to get him committed again because when he realized I was there he stopped trying to drown her and came after me.”

“If Marcella had shot her husband without any obvious reason she would have been arrested for murder. She needed a witness and a believable explanation for pulling the trigger. She told him she was expecting an investigator because she knew he would fly into a rage when he saw you. That would give her the excuse to kill him. She would be the heroine of the situation because she stopped her husband from murdering you. She certainly would not have been arrested in those circumstances and her terrifying husband would be safely dead.”

Lyra began to pace the room. “But things went wrong. He turned on her first.”

“If you hadn’t arrived when you did she would have died. You saved her life when you used that golf club on Adlington.”

Lyra stopped in the middle of the room. “But suddenly Marcella was faced with an unplanned scenario. The whole point was to make sure she got rid of her husband but she wasn’t sure that Adlington was dead. Neither of us could tell if he was alive and we didn’t dare get close enough to check for a pulse.”

“So when you went around the house to greet Detective Brandon, Marcella picked up the golf club and made certain that her husband would not survive.”

Lyra nodded slowly. “Yes, that is exactly what happened. I don’t believe Marcella ever intended to hire Kirk Investigations. She just wanted her husband dead.”

Raina sighed. “Welcome to my world. Rule number one is always assume the client is lying or, at the very least, not telling you the whole truth. Everyone has secrets to protect.”

Raina sat forward and clasped her hands on the desktop. “Are you sure you want to be a private investigator?”

“Please don’t fire me because of what happened today.”

Raina raised her brows. “I’m not going to let you go because of that. After all, you saved the client–.”

“You saved the non-client and yourself. You exhibited remarkably sharp thinking under extraordinarily dangerous circumstances. I am very impressed with your golf swing, by the way.”

Lyra’s jaw tightened. Shadows veiled her eyes. She turned away and went back to the window.

“What bothers me is that I’ll never know,” she said quietly.

“If I’m the one who killed Charles Adlington. I only struck him once, Raina, but I hit him very hard. There was a lot of blood. But Marcella Adlington hit him several more times.”

Raina tried and failed to come up with a comforting response. She said the only words she knew to be true.

“You did what you had to do to save yourself and Marcella Adlington,” she said. “That’s all that matters. There are always unanswered questions in this business. Fact of life. You have the makings of a good investigator but I believe you should give your career plans some serious thought before you decide if you want to stay with this firm.”

“And now we are going to follow a long-standing tradition in this business.”

Lyra gave her a wan smile. “What’s that?”

Lyra looked bemused. “What are we celebrating?”

“How about the fact that you and Marcella Adlington both survived?”

Lyra took a deep breath. “You’re right. That is definitely something worth celebrating.”

“This evening you and I will go out on the town. We will start with cocktails and dinner at the Burning Cove Hotel and then we will catch a cab to the hottest nightclub in town, the Paradise.”

Lyra Brazier has been bitterly disappointed recently, by her cheating fiancé, and by her own father.  All of Lyra’s hard work to make herself an invaluable asset to her father’s company has been for naught.  He refuses to ever turn the company over to her.  So, needing a fresh start, Lyra travels to Burning Cove, California – a small town known to be the go-to destination for Hollywood stars and powerful people.  Using her gift of persuasion, Lyra convinces Raina Kirk to hire her as an investigator for her agency.  Lyra’s first assignment, which should have been a walk in the park, turns out to be a disaster, with her being involved in a death, possibly a murder.

Simon Cage is officially an antique books dealer, but he also handles investigations on the side.  His latest assignment has left him longing for a few days of rest and relaxation, and if he’s really lucky, the company of an exciting woman.  Simon has decided to spend that time at Burning Cove, as that’s where he has to report in to his last client, Luther Pell, who is a high-powered man and club owner there.  Upon his arrival, it’s discovered that Raina, who is Luther’s lover, has left town under mysterious circumstances and may be in danger.  Simon immediately takes on the task of finding her, but Lyra is insistent on being part of the investigation for her new boss.  The trail leads them to a swanky spa, where they pose as newlyweds.

Simon and Lyra are initially a bit adversarial toward each other, especially on Lyra’s part.  Simon is quite taken by her beauty, and soon comes to see that her easy charm and persuasiveness to others is a genuine asset to the investigation.  Lyra is also clever enough to see that Simon has a special ability, one that he insists is only intuition, but she knows is much more.  As they get to know each other a little better, Lyra definitely begins to warm to Simon.  I love one particular instance when a somewhat stunned Simon comes out and asks Lyra, “Are we flirting?”

THE LADY HAS A PAST actually has two romances happening along with the mystery.  Simon and Lyra quickly become lovers, and their relationship is intense.  I was actually more touched by the alliance between Raina and Luther, which has been ongoing for a while.  They have shared intimate moments, yet have never spoken of love, or even spent a full night together, as they both suffer nightmares from their pasts.  Once Raina is in danger, it seems that all of Luther’s hesitation is gone, as he’ll do anything to rescue the woman he knows that he loves.  I love that all four of these people are accepting and forgiving of the others’ pasts, and support and help each other to heal.  As always, Amanda Quick includes a mystery, as well as another twist to keep things interesting.  THE LADY HAS A PAST stands on its own, though some of the characters have appeared previously in books in the BURNING COVE series.  My favorite thing about a book by Amanda Quick (in any of her incarnations) is how the love interests are either misfits, or injured, yet somehow are perfect to the other.  The book flowed along at a great pace, and had me reading it all in one sitting.  I recommend it for fans of this author, as well as those who enjoy a well written and enjoyable romantic suspense novel.    ~Rose