Review – Someone to Cherish by Mary Balogh 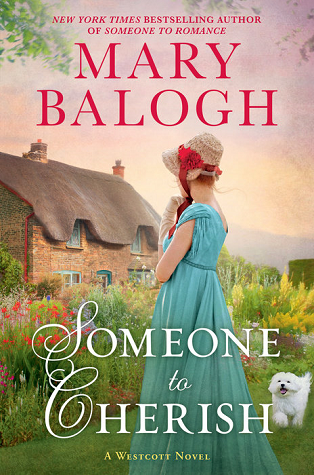 Is love worth the loss of one’s freedom and independence? This is what Mrs. Tavernor must decide in the new novel in the Westcott series from New York Times bestselling author Mary Balogh.

When Harry Westcott lost the title Earl of Riverdale after the discovery of his father’s bigamy, he shipped off to fight in the Napoleonic Wars, where he was near-fatally wounded. After a harrowing recovery, the once cheery, light-hearted boy has become a reclusive, somber man. Though Harry insists he enjoys the solitude, he does wonder sometimes if he is lonely.

Lydia Tavernor, recently widowed, dreams of taking a lover. Her marriage to Reverend Isaiah Tavernor was one of service and obedience, and she has secretly enjoyed her freedom since his death. She doesn’t want to shackle herself to another man in marriage, but sometimes, she wonders if she is lonely.

Both are unwilling to face the truth until they find themselves alone together one night, and Lydia surprises even herself with a simple question: “Are you ever lonely?” Harry’s answer leads them down a path neither could ever have imagined…

AMAZON US BUY LINK: Someone to Cherish (The Westcott Series Book 8)

Ten years ago, when Harry Westcott was just twenty, he was enjoying all the pleasures of a newly titled earl with plenty of friends, wealth, and property.  His world came crashing down when it was discovered that Harry’s late father, the former earl, had married Harry’s mother while his first wife was still alive.  All of a sudden Harry lost his title, his wealth, his place in society, and his very legitimacy.  Harry reacted by rushing off to join the army.  The intervening years saw Harry sustain many injuries, the ones he received at the battle of Waterloo being almost fatal.  After a long recovery, Harry is content with his life now, rusticating at his childhood home, courtesy of his half sister, Anna.  The Westcott family wants to see Harry become more than content.  With his thirtieth birthday approaching, they have decided that Harry is in need of someone to cherish.

Lydia Tavernor has come out of mourning for her husband of six years, Isaiah, who was the revered and much loved vicar of the village.  When Lydia fell in love and married Isaiah, she had no clue that all he wanted and needed was a helpmeet, and that all his passion and zeal was for his vocation.  Lydia fell into her role, while becoming, to her mind, invisible, except for being the appendage of her husband.  During her year of mourning, Lydia decided to stay in the village, purchasing a small cottage, and making a few friends.  She slowly begins to socialize, and rejects the offers to return to her father’s home, or to live with her brother-in-law and his wife.  Lydia’s unhappy marriage has made her wonder what it would be like to have a lover, as she certainly doesn’t want another husband.  When Harry walks her home as a matter of courtesy one evening, her query to him of whether he ever gets lonely opens up a whole can of worms she could never have imagined.

For the first time, Harry takes a good look at the woman he has casually known, but not really seen, as he tries to decide if he’s just been propositioned.  Meanwhile, Lydia is mortified, and quickly leaves Harry to stand on her doorstep as she rushes inside.  They are both equal parts enticed and appalled at the thought of having an intimate relationship.  Harry is not ready to marry, and Lydia has made it clear that she won’t marry again.  Surely in a town this small, any attempts to carry out a secret affair would be soon found out, and ruin Lydia’s reputation, as well as putting Harry in a bad light.  They begin a dance of will-they-or-won’t-they, and discover a genuine liking for each other to go along with their attraction.  Their brief taste of passion is satisfying, but both decide that they can’t continue.  However, their behavior has been noticed, and the gossip starts.  To make matters worse, the entire Westcott clan has decided to descend upon Harry, bringing along a trio of young ladies, hoping that one will catch his fancy.

SOMEONE TO CHERISH definitely builds on the previous books in the series, though Mary Balogh is careful to define each family member to readers who may have just jumped into this installment.  I loved watching Harry mature and come to terms with his anger over his losses.  Though he still suffers nightmares from his war experiences, he has learned to accept and live with his past.  He has become a man of honor and character, and his acceptance of his half sister is emotional and touching.  His slow realization that he is in love is wonderful to read, as is the way he treats Lydia.  I cheered for Lydia as she grew as a person in her own right, after years of invisibility.  She became strong enough to stand on her own, then became confident enough in her love to trust that Harry would never treat her as her first husband did.  Together, their passion and genuine friendship, along with their love bodes well for a sweet happy ever after.  I love this family, how they all support and want happiness for everyone.  Few authors can match Mary Balogh for heartwarming emotion, strong family connections, and romance.  SOMEONE TO CHERISH showcases all these things, and I most highly recommend it, as well as all the previous books in the series, to readers who want to lose themselves in an excellent and satisfying journey to love.   ~Rose