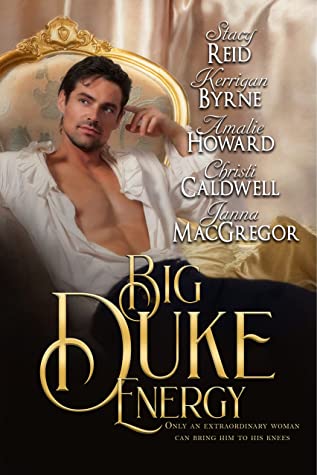 The Seasons of Sin 2022 Anthology Collection.  Big Duke Energy is all brand new content where beloved secondary characters are granted their second chances at long-awaited happily ever afters!

THE EARL ON THE TRAIN by Kerrigan Byrne
Sebastian Moncrieff is a villain, a traitor, and a pirate, who has recently inherited an Earldom he never wanted. As a man who’s committed every sin imaginable, he knows his only chance at redemption is the one woman who ever reached through to his soul of ice. He’s kidnapped Veronica Latimer once before, and was enchanted by everything about her… This time, when he takes her, he’ll have to admit that she’s kept his heart captive since the moment they met. But can he convince her to forgive his past in order to claim a future?

LOVED AND FOUND: Christi Caldwell
Lieutenant Thaddeus Phippen has lived a lifetime away from the only love he ever knew, a powerful duke’s daughter. He’s now returned from fighting Boney’s forces, ready to put aside tragic battlefield remembrances and the memory of past heartbreak of love lost. Or that was the plan…until Thaddeus finds himself face-to-face with the one woman he soon finds he can’t ever forget… Is the divide between former lovers too great to forge a future together…or can they at last have a love to last a lifetime?

THE WOLF OF WESTMORE by Amalie Howard
Lord Wulfric Bane, the Duke of Westmore knows that blood is thicker than water, that duty is more important than personal desire, and that some things, like falling in love, are never meant to be. Cossetted and coddled Lady Jocelyn Capehart has been bred to be the perfect lady. On the outside, she is demure, sweet, and biddable, but on the inside, a vixen longs to break free of her cage. A chance meeting at a sultry club leads to one sinfully explosive night that neither of them can forget.

PUT UP YOUR DUKES by Janna MacGregor
Martin “Duke” Richmond bows to no one, including any duke who protests what he publishes in his sensational gossip rag, The Midnight Cryer. Estranged from her husband for five years because of the incendiary gossip he spews, Amelia Richmond has made a life for herself smoothing “marital problems” with society’s most powerful couples. Her business faces ruin when her husband, Martin, goes on a rampage against one of the most powerful dukes in the British Isles. Using her best persuasive techniques to rein in Martin, Amelia finds herself falling for him once again which is bad…very bad.

DUKE OF EVERY SIN by Stacy Reid
Ethan Benedict, Duke of Bainbridge, has been an object of fear, fascination, and salacious gossip for years. To many, his reputation would make him an unlikely savior of a baby left on his doorstep. But Ethan saw the child as perhaps a pathway to redemption. What he did not anticipate was for his jaded heart to soften toward the mysterious young woman who infiltrates his household and secretly cares for the child.

The Earl on the Train by Kerrigan Byrne

Sebastian and Veronica have an interesting history together.  She and her late husband were former captives of pirates, one of whom was Sebastian.  After Veronica’s cruel husband was killed, she was released, and now makes a living as a seamstress and companion.  She is currently traveling on the Orient Express, when she awakes to find Sebastian holding a knife to her throat.  He was on a personal mission of revenge, only to find that instead of his intended victim, Veronica is there instead.  This is the woman who has got under his skin as no other ever has.  An unlikely, yet strong, web of desire wraps up this couple, who finds that, despite their disturbing past, they want nothing more than a future together.

Loved and Found by Christi Caldwell

Thaddeus is a bricklayer’s son, who finds a kindred spirit in Edie, a duke’s daughter.  They are best childhood friends, and evolve into teenage lovers.  When Edie’s parents see the direction their relationship is heading, they purchase a soldier’s commission for Thaddeus, convincing him to better himself to become a man more suitable for their daughter.  When Thaddeus finally returns, it’s to learn that Edie has married another.  Of course, things aren’t always as they seem, as Edie never stopped loving Thaddeus.  It seems that they are to be star crossed lovers, but fate has other plans, and makes the way for their long overdue happy ever after.

The Wolf of Westmore by Amalie Howard

Jocelyn and Wulfric are members of feuding families, yet she has been intrigued by him since their first brief meeting.  As Jocelyn’s father makes plans to marry her off to an old peer, she makes plans to have a night of passion for herself.  In disguise, Jocelyn sneaks into Wulf’s naughty club, and places the winning bid for a night of Wulf’s company.  Jocelyn discovers that she has a decidedly sexual nature, and her first taste of passion is more than she could have imagined.  She sneaks out before Wulf awakens, leaving him questioning her identity and wanting to see more of the mysterious lady.  This couple will find their way to each other, despite their family history, and discover that their relationship has evolved into more than sex.  (This story involves light bondage, spanking, and voyeurism.)

Put Up Your Dukes by Janna MacGregor

Amelia and Martin’s blissful one month marriage fell apart when he, being the editor of a gossip pamphlet, published a false story about her dearest friend, though she pleaded with him not to do so.  Unable to live with the way her husband makes his living, Amelia moves out, and they now live apart – well, mostly, sort of… Once a week, they still meet and spend the night together.  Their passion has never waned, though they can’t seem to reconcile.  After five years of this arrangement, Martin wants his wife back for good, for always, for every day and night.  How much will one, or both, of them be willing to compromise in order to have a real marriage again?

Duke of Every Sin by Stacy Reid

Verity lost her place in society when she chose to support her sister, who had a child, Thomas, out of wedlock.  She cared for the baby as her sister became more depressed, and came to love him deeply.  Her sister decides to flee the country, choosing to leave Thomas on the doorstep of her dead lover’s best friend, Ethan.  Verity expects that Ethan will reject the child, and is poised to take him home.  To her horror, Ethan accepts the child, and has no intention of returning him to Verity.  Her attempt to steal Thomas back fails when she is caught.  Ethan proposes a convenient marriage with benefits, which would allow Verity access to her beloved nephew.  The convenient sex soon turns to much more, but will Verity’s new love survive when she discovers the reason why her sister chose this house to leave her son?