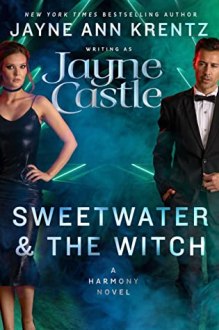 Welcome to the world of Harmony, where—despite its name, things are anything but—danger lurks just beneath the surface in this new novel by New York Times bestselling author, Jayne Castle.

If there’s something Ravenna Chastain knows, it’s when to end things. And after she almost winds up the victim of a cult that believes she’s a witch, it’s easy to walk away from her dead-end career, ready for a new start. But where to find a job that would allow her to use her very specialized skill set? The answer is clear: she becomes a matchmaker.

But even a successful matchmaker can’t find someone for everyone, and Ravenna considers Ethan Sweetwater her first professional failure. After nine failed dates, Ravenna knows it’s time to cut Ethan loose. But Ethan refuses to be fired as a client—he needs one final date to a business function. Since Ravenna needs a date herself to a family event, they agree to a deal: she will be his (business) date if he will be her (fake) date to her grandparents’ anniversary celebration.

What Ethan fails to mention is that attending the business function is a cover for some industrial espionage that he’s doing as a favor to the new Illusion Town Guild boss. Ravenna is happy to help, but their relationship gets even more complicated when things heat up—the chemistry between them is explosive, as explosive as the danger that’s stalking Ravenna. Lucky for her, Ethan isn’t just an engineer—he’s also a Sweetwater, and Sweetwaters are known for hunting down monsters…

“You can’t dump me,” Ethan Sweetwater said. “I’ve got a contract with this matchmaking agency. You owe me one more date.”

“To be clear,” Ravenna said, “I am not dumping you. I am trying to explain that I cannot help you.”

“I don’t believe it. When my nephew Jeff recommended you, he said you have the eye.”

“Your nephew met me one time, and that was several months ago, when I was doing criminal profiling, not matchmaking. This work is quite different.”

Actually, it was not all that different, she reflected. It turned out that criminal profiling had a lot in common with matchmaking. The emotional drivers were key.

“Maybe you’re not trying hard enough,” Ethan suggested. That was nothing less than an insult.

“I am a professional, Mr. Sweetwater,” She said coldly. “ I assure you I have given your case my closest attention. In fact, all four of us here at Ottoway, including Ms. Ottoway herself, have gone through the files several times trying to find good matches for you.”

She did not add that there were only two reason Ethan Sweetwater—aka the client from green hell—was still on the books. The primary one was the contract. It stipulated that he was to receive a minimum of ten matches. The second reason, of course, was that Bernice Ottoway, the proprietor of Ottoway Matchmakers, was desperate not to lose such a high-profile client. The Sweetwater name carried a lot of weight, not just in Illusion Town but throughout the four city-states. A successful match for a member of the notoriously private clan that controlled a huge chunk of the amber market would give Ottoway a major promotional hit. It also would do a lot for her career, Ravenna thought. Sadly, a successful outcome did not appear to be in the cards.

“We will be happy to refund your money and refer you to another agency,” Ravenna said. Mentally she crossed her fingers. Bernice Ottoway never returned a client’s money if she could help it, but surely she would understand that Ethan Sweetwater was a hopeless case.

“I don’t want to waste my time starting from scratch at another agency,” Ethan said. “I was assured that here at Ottoway the process would be efficient and professional.”

“It would have helped if you had been more forthcoming on the Ottoway questionnaire,” Ravenna said.

“Don’t try to blame this on me, Ms. Chastain.” I’m the client, remember? The customer is always right.”

He was standing in front of her desk. He reached down somewhat absently to scratch Harriet behind her ears. The dust bunny was in the process of rearranging the pens in the tray. She paused to chortle appreciatively. Ravenna stifled a groan. She and the entire staff at Ottoway might have a problem with Ethan, but Harriet’s relationship with him was just fine. Uncomplicated, she thought. Unlike me.

“I must tell you that, according to the after-action reports I received from the nine dates I arranged for you, your dating technique leaves something to be desired,” she said.

“There you go, blaming the client again. If I’ve got a technique problem, you should help me fix it.”

“Ethan adjusted his black-framed glasses, turned away from the desk, and crossed the office. He took a stance at the window overlooking the quiet residential street.

She liked watching him move, Ravenna thought. He reminded her of a specter-cat, all prowling grace and elegant strength. He had the eyes to match. They were a dark amber gold and infused with the cold heat of controlled power—the eyes of an apex predator. The amber stone in his gold signet ring was the same color.

Eyes like Ethan’s probably made some people nervous, she thought. Maybe that was the reason he chose to wear glasses. Or maybe he thought they went with the rest of his persona.

Excerpted from Sweetwater and the Witch by Jayne Castle Copyright © 2022 by Jayne Castle. Excerpted by permission of Berkley. All rights reserved. No part of this excerpt may be reproduced or reprinted without permission in writing from the publisher.

Ravenna Chastain is a talented FBPI profiler on the world known as Harmony, a planet similar to an earlier version of earth, but with plenty of mysterious depths yet unexplored.  When an unusual field assignment results in Ravenna being captured by a radical cult, and only being saved due to her own intelligence and power, she decides a change of occupation is in order.  She becomes a successful matchmaker – that is, until her latest assignment proves unmatchable.

Ethan Sweetwater is from a wealthy and powerful family, but he chose to open his own business rather than just join the family’s.  He is an engineer, but he can’t deny that the hunter blood flows in his veins.  Ethan found himself embroiled in a scandal with a married woman, (there’s more to the story than meets the eye) and decides to hire a matchmaker, hopefully to find a woman suitable to be his wife.  After nine disastrous dates, Ravenna is ready to dismiss Ethan, but they come to an agreement to attend two functions together where they both require a “plus one”.  Little does Ravenna know, that this is just what Ethan was working toward – a chance to spend time with her on a more personal level.

If you haven’t read any of Jayne Castle’s Ghost Hunter series, it’s helpful to know that Harmony is a dark and dangerous place.  There is a residual mysterious energy, one that seems to enhance, or even create a variety of psychic talents in its residents.  Ravenna has the power to create fire, thus being dubbed a witch by some, while Ethan has the ability to hunt villains, also known as the monsters.  When Ethan and Ravenna become targets, with their very lives in danger, their casual relationship quickly becomes more intense and personal.

SWEETWATER AND THE WITCH zooms along at a rapid pace, with plenty of action, and a passionate romance. I really enjoyed becoming lost in the world of Harmony, and Ethan and Ravenna have some of the characteristics I enjoy most – they don’t play games about their feelings, and they respect each other’s intelligence.  This book was just fun to read, and I didn’t guess the identity of the villain.  I love to be surprised. And, oh, the dust bunnies (think of gremlins).  Ravenna’s dust bunny is named Harriet, and she has a penchant for stealing pens, and food – she loves food.  I recommend SWEETWATER AND THE WITCH for fans of the series, though it reads easily as a standalone, as well as those just looking for a few hours of entertainment that’s out of this world.    ~Rose