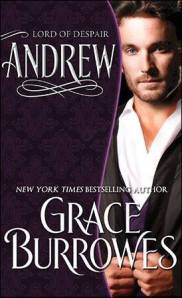 Andrew and his brother, Gareth, share a sad family history.  Years ago, a tragic boating accident killed six people, including five members of their family.  While Gareth wasn’t present, Andrew was, and managed to rescue his mother.  They were they only two survivors.  Though he was only fifteen years old at the time, Andrew is carrying a heavy load of guilt, because there is more to this accident than is generally known.

As an adult, Andrew meets seventeen-year-old Astrid, whose sister is involved with his brother.  She is beautiful and sweet, and obviously smitten with him.  He is also very attracted to her, but he has no intention of making any permanent ties.  He doesn’t want to hurt her, so before things go any further between then, he decides he needs  to leave.  And leave he does, not just town, but he leaves the country.  Two years after he left, Astrid finally accepts that he won’t be coming back for her and decides to make a convenient marriage.  She marries an amiable man, whom she doesn’t love, and proceeds to get on with her life.

Two more years pass, and Andrew decides to come home.  He is aware that Astrid has married, and feels he’ll be safe from the attraction he had.  But at the same time he’s travelling home, Astrid’s husband is killed in an accident.  She’s now a widow with a baby on the way.  Since his brother, Gareth, and her sister, Felicity, married, there is a family connection, and he can’t avoid seeing her. It’s not long after they meet again before they are as enthralled with each other as they ever were.  They begin an affair, agreeing that it’s only a temporary thing.

As they become closer, Andrew stubbornly refuses to consider marriage with Astrid.  He feels unworthy of deserving happiness because he feels (as his brother Gareth did) that he can never be faithful. (I love it when Gareth tells him that bed hopping has lost its appeal, and he’s quite happy with one woman.)   He also is still carrying the secret of what happened during that boating accident years ago, which makes him think that he doesn’t deserve to have a wife, and particularly, children.  This is even more poignant because Andrew is a generous, caring man.  Where Gareth was hard and cold, Andrew is  warm and nurturing.

Then events occur which indicate that Astrid’s husband may have been murdered, and now her unborn child (who, if a boy, will be the next heir) and she, herself, are in danger.  It takes high drama, and yet more secrets about the past being revealed before our star crossed lovers can have their happy ever after.

Grace Burrowes has created another delicious hero in this Book 7 of the Lonely Lords Series.  It’s not necessary to have read the previous books to enjoy this story, but Book 6, Gareth, gives you more insight into this family, and allows you to see Andrew and Astrid’s initial meeting.  This book also introduces us to Douglas, who will be the next Lonely Lord, and whose story takes us full circle back to the Windham family.  Yes, I am hooked!  Grace Burrowes is good, she is very, very good