About A BRIDE FOR THE SEASON

London’s most scandalous bachelor has finally gone too far. Caught in a situation that was innocent but too compromising, James Simpson is forced to admit that he must do the honorable thing and marry the lady. Unfortunately, marriage alone will not be enough to appease her father. He won’t agree to a dowry unless James can find a suitable husband for the lady’s elder sister-the shy and awkward Lucinda Cardington.

Lucinda doesn’t care that she is close to being “on the shelf”; she has more serious pursuits in mind. She enjoys the friendship she and James share over their love of photography, but she leaves dreams of romance to silly young ladies like her sister. James does manage to find a match for Lucinda, and his efforts to get them together are about to succeed…until James comes to the distressing realization that he doesn’t want Lucinda in anyone’s arms but his own.

The youngest child of a Navy pilot and a journalist, Jennifer acquired a love of adventure and an excitement for learning that continues to this day. She’s lived in three countries and traveled throughout theU.S. An avid reader of classics and historical fiction, she also enjoys biographies and histories, which she mines for the vivid details to bring to life the characters and places in her books. She resides with her husband in North Carolina–where, when not writing or dreaming up romantic adventures for her characters, she can be found fantasizing about her next ski trip or European vacation. 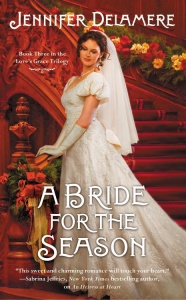 “You can do this, Lucinda. You have nothing to fear from a man on the dance floor. The vast majority of us don’t even bite.”

“You are trying to joke your way out of this. Although I heartily approve of the tactic, I shall not allow you to do it.”

He launched into his favorite waltz. After a brief hesitation, Lucinda joined in.

“Enjoy the music, Lucinda. Feel it, in your bones.” He reached again for her hand, feeling a burst of pleasure as it slipped easily into his.

They were moving now, tracing a small circle in the center of the room. She kept her eyes fixed on his. Her lips parted slightly, her front teeth briefly tugging at her bottom lip in an artless gesture that was undeniably appealing.

Lucinda appeared completely transported by the dance. Her mouth opened to a smile and a small sigh escaped her. And that’s when a thought crossed his mind that was more dangerous than any yet: Lucinda is beautiful. Not just pleasant, or passingly pretty. From her soul to her soft brown hair, inside and out, she was the most beautiful woman he had ever known . . .

Lucinda Cardington is happily on her way to spinsterhood.  Her flighty younger sister, Emily, has no intentions of becoming a spinster.  She has set her sights on James Simpson, and is determined to have him.  Her reckless behavior leads to her being compromised, which suits her purpose, but also sets off a chain of events.  James is resigned that he must marry Emily, though he was truly the innocent victim of her schemes.  At least he’ll have a pretty bride with a big dowry.  But Emily’s papa has decided that Lucinda must be married too, and if she isn’t, there will be no dowry for James and Emily.

So, James sets out to find a husband for the reluctant Lucinda.  As he spends more time with her, he realizes what a treasure she truly is.  Soon it’s apparent that he is set to marry the wrong sister.  It’s too late for anything to happen to change this – or is it?  As Lucinda becomes engaged, the situation becomes more tangled as she realizes that she’s falling for James as well.

As this story progresses, we see James mature from a somewhat superficial, rakish man into a better person, while Lucinda was a worthy heroine from the beginning.  This sweet romance (no explicit sex) has a resolution that is clever, and bound to leave you smiling.