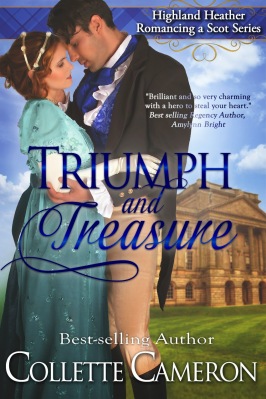 Angelina Ellsworth once believed in love—before she discovered her husband of mere hours was a slave-trader and already married. To avoid the scandal and disgrace, she escapes to her aunt and uncle’s, the Duke and Duchess of Waterford. When Angelina learns she is with child, she vows she’ll never trust a man again.

Flynn, Earl of Luxmoore, led an enchanted life until his father committed suicide after losing everything to Waterford in a wager. Stripped of all but his title, Flynn is thrust into the role of marquis as well as provider for his disabled sister and invalid mother. Unable to pay his father’s astronomical gambling loss, Flynn must choose between social or financial ruin.

When the duke suggests he’ll forgive the debt if Flynn marries his niece, Flynn accepts the duke’s proposal. Reluctant to wed a stranger, but willing to do anything to protect her babe and escape the clutches of the madman who still pursues her, Angelina agrees to the union. Can Flynn and Angelina find happiness and love in a marriage neither wanted, or is the chasm between them insurmountable?

Dozens of bejeweled and elegantly gowned ladies swirled by, but none were the charming damsel he sought. He’d met the delectable Miss Lydia Farnsworth three weeks ago and had made a point to appear at every function she was rumored to attend from that evening onward.

Avoiding the eager hawk-like gazes of plotting mamas and the hungry expressions of their husband-hunting daughters, he sent a questioning look to the Duke of Harcourt lounging against the ballroom’s entrance.

Sporting a cocky grin, Harcourt shrugged and raised his champagne flute in a mock salute.

Blast the man. He’d sworn his Scottish cousin would be in attendance tonight. Should Flynn make his excuses and try to find Miss Farnsworth at another gathering? Which one? He’d received at least a dozen haut ton invitations for this evening.

Flynn feared he was fast becoming a besotted fool. He grinned. He rather liked the idea. In fact, he intended to call on Harcourt tomorrow and state his intentions regarding the duke’s cousin. How long should Flynn wait to propose to the refreshingly intelligent and witty Miss Farnsworth? Not long, perhaps even tomorrow after he’d spoken to Harcourt.

She reminded him of his free-spirited cousins. He found her enchanting. He was confident she returned his admiration and would accept his proposal. Yes, when next he ventured into the social fray, he would be betrothed.

A delightful laugh echoed behind him.

Turning slowly—it wouldn’t do to appear too eager—he spied the raven-haired beauty in a stunning pink and white gown. As usual, she was surrounded by a bevy of calf-eyed beaus. Little did they know by this time tomorrow, she would be unavailable to the drooling milksops.

He took a leisurely sip of champagne, trying to decide on the best strategy to steal Miss Farnsworth away for the next waltz. And the supper dance, of course. Perhaps she’d agree to stroll the gardens with him, and he could finally sample her sweet lips.

In his mind, he’d already claimed her as his countess.

Award winning, best-selling author, Collette Cameron, has a BS in Liberal Studies and a Master’s in Teaching. Author of the Castle Brides Series and Highland Heather Romancing a Scot Series, Collette writes Regency and Scottish historicals and makes her home in the Pacific Northwest with her husband and five mini-dachshunds. Mother to three and a self-proclaimed Cadbury Chocolate chocoholic, Collette loves a good joke, inspirational quotes, flowers, trivia, and all things shabby chic. You’ll always find dogs, birds, quirky—sometimes naughty—humor, and a dash of inspiration in her novels. Her motto for life? You can’t have too much chocolate, too many hugs, or too many flowers. She’s thinking about adding shoes to that list. Collette’s a member of RWA, The Beau Monde, Hearts Through History, Celtic Hearts,  Faith, Hope and Love, Inc., GSRW, and Rose City Romance Writers.

Collette is always seeking enthusiastic historical romance lovers eager to share and promote her books  on her street team.
Just like her Facebook Page and send her a message that you would like to join!

a Rafflecopter giveaway
Special Giveaway for Reviewers:
Collette will be doing a special giveaway for anyone who leaves a review on Amazon.com by December 17th. Just post a review and Collette will randomly select one reviewer to win a Gift Card valued at a minimum of $25 but will increase in value as the number of reviews left increases!