Blurb
Bound by centuries of bad blood, England’s two most powerful families maintain a veneer of civility…until the heir to the staggering Redmond fortune disappears, reviving rumors of an ancient curse: a Redmond and an Eversea are destined to fall disastrously in love once per generation.

Rumor has it she broke Lyon Redmond’s heart. But while many a man has since wooed the dazzling Olivia Eversea, none has ever won her—which is why jaws drop when she suddenly accepts a viscount’s proposal. Now London waits with bated breath for the wedding of a decade…and wagers on the return of an heir.

It was instant and irresistible, forbidden…and unforgettable. And Lyon—now a driven, dangerous, infinitely devastating man—decides it’s time for a reckoning. As the day of her wedding races toward them, Lyon and Olivia will decide whether their love is a curse destined to tear their families part…or the stuff of which legends are made.

Author Info
Julie Anne Long originally set out to be a rock star when she grew up, and she has the guitars and the questionable wardrobe stuffed in the back of her closet t prove it. When playing to indifferent crowds at midnight in dank clubs lost its, ahem, charm, she realized she could incorporate all of the best things about being in a band—namely, drama, passion and men with unruly hair—into novels, while at the same time indulging her love of history and research. So she made the move from guitar to keyboard (the computer variety) and embarked on a considerably more civilized, if not much more peaceful, career as a novelist.
Julie lives in the San Francisco Bay Area with a fat orange cat. (Little known fact: they issue you a cat the minute you become a romance novelist.)

He’d last seen Pennyroyal Green in the dead of night almost five years ago. His trajectory since then had been as swift and mindless as if he’d been shot from a cannon. And it wasn’t just because of what Olivia had said to him in the garden after midnight, in the pouring rain. Though after she’d said what she’d said, for a time he’d stopped caring what became of him.

No, that fuse had been lit for longer than anyone knew.

No one from Sussex had seen him since.

Though one had certainly tried. He half smiled at the thought of Violet.

And it was this that had broken the speed of his trajectory.

And he’d had his own methods for remaining, however tangentially, informed about the lives of those he’d left behind. He’d proved something over the past five years. He’d at first thought it was all for Olivia. But he was no longer certain. He’d tried to purge his life of her, relinquishing even her miniature.

But what no one knew, not even his crew, was that this was his final voyage. He’d risked this trip into London to track down the source of a little mystery that could devastate Olivia and her family.

He now had his answer.

He was, strangely, not surprised by it.

But he hadn’t been prepared to make a decision about what to do next so soon.

Suddenly it hurt to breathe. Fragments of memories rushed at him, each distinct as stained glass.

Olivia walking along the road to the Duffys’ house, then breaking into a run when she saw him waiting beneath the elm tree, her face lighting like a star. As if even a second away from him was wasted.

That was the memory that always came to him in his darkest moments.

And now she was giving herself to another man.

His fingers curled on a surge of emotion. But he stopped just short of giving the message the crushing it deserved.

She. If Lavay had indeed written that word, he might have seen her, or even talked to her, or …

He couldn’t do it.

He couldn’t bloody do it.

And this is what decided him.

He tucked the message into his coat. “You can go, Ramsey,” he said. “Thank you.”

The footman spun and nearly bolted, silver braid glinting in the sun.

Lyon turned to face all the expectant faces of his crew.

It was time for a reckoning. 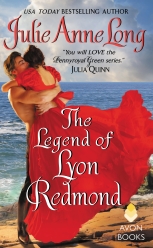 Throughout all of the numerous books of the Pennyroyal Green series, we have been teased with tiny glimpses of the ill fated love affair of Olivia Eversea and Lyon Redmond  We only know that they parted years ago, Olivia went into a decline, and Lyon disappeared.  Olivia turned down suitor after suitor, and no one knows where Lyon is, or if he’s even still alive.  Finally, five years have passed, and Olivia has decided to come back to the living.  She has accepted the proposal of a viscount, and the date is set for them to marry.

Someone, though, does know where Lyon is, and owes Lyon his very life.  He gets a message to Lyon, telling him that Olivia is about to wed.  After all this time, and all that he’s done, just hearing that Olivia is about to give herself to another man pierces Lyon’s heart.  He can’t let her marry another, not without a face to face confrontation.  So, he devises a plan to meet her, and convinces a shellshocked Olivia that they need to have a conversation, and he requests they have it in private, aboard his ship.  She agrees, and finally they confront their past.

Personally, I have been desperately waiting for this story.  I wanted the details of how they met, how they fell in love, and what parted them.  Their story is told in flashbacks, skillfully intertwined with the present time.  And it is a breathtaking story.  If love at first sight does exist, this is a genuine example of it.  They were both so young, and had an innocence about their relationship, though make no mistake, there was passion.  Because of their feuding families, they had to meet in secret.  When an ultimatum is issued that will affect their future, a life altering decision has to be made on the spot.  Fear and doubt creep in, and the lovers are tragically parted.

What a magnificent job Julie Anne Long has done!  You feel their joy when they first fall in love.  You feel their anguish as they part.  The most wonderful thing is that at their reunion, they did not snipe and try to wound each other further.  They TALKED, and it was beautiful.  This reunion, though, was not the resolution.  The next series of events that leads to their happy ever after was picture perfect.  I am a big fan of epilogues, and THE LEGEND OF LYON REDMOND has a very unique one.  No spoilers, but it was unlike any I have read.  Quite honestly, I have mixed emotions about it, though the information it provides is invaluable.

In conclusion, this book is worth the wait.  It’s powerful, emotional, and passionate and will be one of my favorites of this year.  While one could read and follow the story without having read the rest of the series, all of the mystery and anticipation building up to this grand finale certainly adds to its appeal.  I fell in love with both Olivia and Lyon, and I so love this book, that I am ready to go read it again, though I just finished it.  Julie Anne Long is a gifted writer, and the whole Pennyroyal Green series has been a joy to savor, with this being the piece de resistance.

Rafflecopter Giveaway – Grand Prize of a $50 Gift Card to eBook Retailer of choice, Second Prize winner will get the complete set of Pennyroyal Green Books 1 – 11 by Julie Anne Long.  Click on following link to enter:
a Rafflecopter giveaway