An American in Scotland by Karen Ranney – Virtual Tour, Review, Excerpt and Giveaway

Rose is a beautiful woman with a secret. Desperate and at her wits’ end, she crafts a fake identity for herself, one that Duncan MacIain will be unable to resist. But she doesn’t realize that posing as the widow of the handsome Scotsman’s cousin is more dangerous than she knew. And when a simmering attraction rises up between them, she begins to regret the whole charade.

Duncan is determined to resist the tempting Rose, no matter how much he admires her arresting beauty and headstrong spirit. When he agrees to accompany her on her quest, their desire for each other only burns hotter. The journey tests his resolve as their close quarters fuel the fire that crackles between them.

When the truth comes to light, these two stubborn people must put away their pride and along the way discover that their dreams of love are all they need. 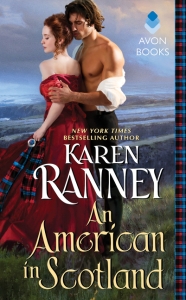 The woman who opened the door was a matronly sort, dressed in a somber blue that nevertheless was a pleasant color for her complexion. Her smile was an easy one, as if she had long practice at being pleasant.

“May I help you?” she asked. “If you’re a friend of the missus, she’s dining with her family now. Like as not it’ll go on for a few hours. Do you need to see her?”

The smell of food wafted out of the house. Rose was so hungry she could define each separate scent: fish stew, freshly baked rolls, roast beef, and something that smelled like fruit cake.

Her stomach growled, as if she needed reminding she hadn’t eaten a real meal in two days.

“Mr. MacIain,” she said, pushing aside both her hunger and her fatigue. “Is he here? I need to see him.”

“You’ve business with Mr. Duncan? Well, he mostly transacts his business at the mill, miss. Wouldn’t it be better to call on him there?”

She didn’t know where the MacIain Mill was. She’d taken his home address from the letters he’d written Bruce.

“I’ve come from America,” she began, and had no more said those words than she was dragged into the house by her sleeve.

“Well, why didn’t you say so from the very first? From America? All that way? And here I let you stand on the doorstep. Is that your valise? And your carriage? We’ll take care of both right away.”

The woman, matronly only a moment ago, had turned into a whirlwind.

Rose found herself being led through the house, following the scent of food until she thought her stomach would cramp. In moments she found herself standing in the doorway of a small dining room.

Dozens of people, it seemed from her first glance, were seated at the table, all of them attractive and well dressed. Some of them were smiling as they looked up.

“Duncan? This lady came all the way from America to see you.”

A man stood, and she thought that hunger must surely have made her hallucinate. Tall, brown-haired, with the most beautiful blue eyes she’d ever seen. He smiled so sweetly at her, so perfectly handsome and kind, that she wondered if he was real.

He was broad-shouldered, with a face that no doubt captured the attention of women on the street. They’d stop to marvel at that strong jaw, that mouth that looked as if it could be curved into a smile or just as easily thinned in derision.

She hadn’t expected him to be so arresting a figure. No doubt that’s why she wavered a little on her feet.

“Yes?” he said, coming around the table toward her.

He regarded her with a direct stare so forceful she felt as if her will were being drawn out of her with that glance.

She reached out one gloved hand toward him. Suddenly everything changed. The air around her grayed. The floor rushed up to greet her instead of him. Yet he somehow caught her when she fell. As he did so, she had the strangest thought, one that troubled her even as darkness enveloped her.

This was why she’d come all this way.

Rose O’Sullivan has somehow managed to scrape together enough funds to allow her to travel to Scotland, in the hopes of convincing Duncan MacIain to purchase a warehouse full of cotton for his mill.  The cotton was grown on her brother-in-law’s land in South Carolina, and has no value unless it’s sold.  Rose, her sister, Claire, and the rest of the household are near to starving, while Bruce (Claire’s husband) has gone off to fight in the Civil War.  Bruce is Duncan’s cousin, which makes Rose even more hopeful that he will buy the cotton.  Rose, in fact, has no legal authority to sell the cotton, but her desperation and desire to save her family have driven her to take this action.  After the long sea journey, and a decided lack of food,  Rose arrives in Scotland, weak and weary.  As she begins to tell her story to the MacIain family, everyone assumes that Bruce is dead, and that she’s his widow.  Realizing that she has a better chance of success with this story, Rose doesn’t correct their assumption, but lets it go on.

Duncan has been worried about his mill.  Because of the American Civil War, he doesn’t have the cotton he needs to be fully productive.  In fact, he contacted his American cousin, Bruce, about buying cotton from him, but never got a positive response.  This opportunity sounds like the answer to his prayers, though there will be danger in travelling to America and avoiding the blockade, and then returning with the cotton.  He decides to take the chance, and makes arrangements for the journey.  Truth be told, the beautiful Rose has intrigued him as no other woman ever has.

As Duncan and Rose journey back to America, their close proximity on the ship allows them to get to know each other very well, and become even more attracted to each other than they already are.  Duncan tries to remain honorable, thinking Rose is his cousin’s widow, but he is soon envisioning a future with Rose in it.  Rose is equally enamored, for the first time in her life, yet she’s under this cloud of deception, and has her family in America to care for.

As more details of the story unfold, we get to see what an amazing person Rose truly is, and what she has endured.  Her strength of character is nothing short of amazing, and her compassion and caring seem limitless.  I was in awe of her, while at the same time, wanting to tell her to please use her head as well as her heart.  The horrors and degradation she endured at the hands of the villain of this story are almost beyond belief.  Yet, she continues to rebound and carry on.  Duncan is a perfect match for her, with his honor and strength.  He believes in her, and comes to her rescue when she needs him, despite how circumstances made things appear.

Karen Ranney totally wowed me with this story, which, while being a fantastic romance, also delved into a shameful and painful part of American history.  The portrayal of people who had no qualms about “owning” other people, and treating them as less than human was eye-opening and heartbreaking.  Imagine thinking, “That’s just the way it is.”  There is a lot of darkness in AN AMERICAN IN SCOTLAND, but there is also hope, love, and a very well deserved happy ever after for two very deserving lovers.  This extremely well written book receives my high recommendation and will go on my favorites list for this year.

USA Today and New York Times bestselling author, Karen Ranney began writing when she was five. Her first published work was The Maple Leaf, read over the school intercom when she was in the first grade. In addition to wanting to be a violinist (her parents had a special violin crafted for her when she was seven), she wanted to be a lawyer, a teacher, and, most of all, a writer. Though the violin was discarded early, she still admits to a fascination with the law, and she volunteers as a teacher whenever needed. Writing, however, has remained the overwhelming love of her life.