Darcy Burke is the USA Today Bestselling Author of hot, action-packed historical and sexy, emotional contemporary romance. A native Oregonian, Darcy lives on the edge of wine country with her guitar-strumming husband, their two hilarious kids who seem to have inherited the writing gene, and three Bengal cats. Visit Darcy online at http://www.darcyburke.com and sign up for her newsletter, follow her on Twitter at twitter.com/darcyburke, or like her Facebook page, http://www.facebook.com/DarcyBurkeFans.
Connect with Darcy: Site | Facebook | Twitter | Goodreads 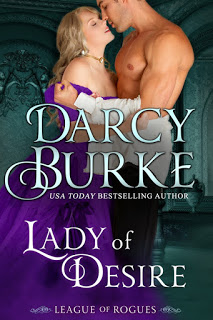 Book 1
Miss Margery Derrington and her dear aunts are in dire straits. Their discovery of a rare manuscript will hopefully stave off their creditors—if it’s worth what they hope. Margery reluctantly allies with a reclusive scholar to use the book to pursue a treasure that could solve their woes. Only, the irresistible desire she feels toward her partner is neither expected nor wanted.
Rhys Bowen can’t believe he has his hands on the elusive de Valery text. Solving its hidden code and unearthing its legendary treasure would establish him as one of Britain’s leading antiquaries, finally casting him out of his brilliant late father’s shadow. But when a centuries-old organization convinces Rhys of the perils of disturbing the past, he must choose between his conscience…and the captivating woman he’s sworn to help.
Purchase: Amazon | Barnes & Noble | iTunes | Kobo
Add to Goodreads

Major Elijah Hollister never wanted to be an earl, particularly not when it meant losing his brother. When a bold adventuress shows up at his door seeking a treasure map, Elijah suspects his brother’s death may not have been accidental and that the lady knows more than she’s willing to share. Whether she’s a friend or foe, Elijah plans to keep her close—and hope the temptation of her kisses doesn’t ruin them both.

Miss Catriona Bowen can almost taste the fruits of her years-long quest to find one of Britain’s greatest treasures. The discovery will deliver the recognition and respect she deserves as an antiquary, despite the fact that she’s a woman. However, to find the map that will lead her to success, she must ally herself with a stoic, yet provocative earl with a different goal. And when a villain threatens their lives, she realizes too late that love is the greatest treasure of all.

Neither of them moved.

Suddenly he stepped forward and cupped the side of her face. He kissed her, trapping her hands with her books between them. Unlike the day before, this kiss was soft, gentle, and so sweet she thought she might sigh with the loveliness of it.

His fingers stroked along the underside of her jaw as his mouth worked over hers. She tipped her head to the side and kissed him back, though she lacked the experience he clearly demonstrated.

He glided his hand back along her neck and she did sigh then, which opened her lips to his tongue. Then he did that thing again, where he slipped it into her mouth, and now she wanted to groan instead of sigh. It was hot and wet and delicious and she couldn’t get enough. And her bloody hands were engaged. Just as she was about to drop her books, probably on his feet, and grasp the front of his banyan, he lifted his head.

“My apologies. I said there’d be no more kissing.” His voice was dark and heavy. “I’m afraid I simply couldn’t resist, but I shan’t do it again. Good night, and this time I mean it.” He tucked his book beneath his arm, went into his room, and closed the door.

Darcy will be giving away TWO prizes to two lucky winners. US shipping ONLY.