Review – Secrets of a Soprano by Miranda Neville 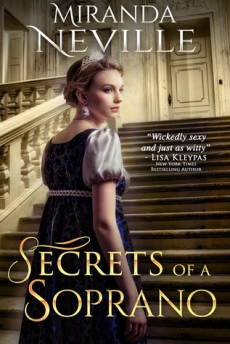 Teresa Foscari, Europe’s most famous opera singer, comes to London to make a fresh start and find her long lost English family. Her peerless voice thrills everyone—except Maximilian Hawthorne, Viscount Allerton, the wealthy owner of a rival opera house. Notorious Teresa Foscari is none other than Tessa, the innocent girl who broke his youthful heart. Yet Max still wants her, like no other woman.

Amidst backstage intrigue and the sumptuous soirées of fashionable London, the couple’s rivalry explodes in bitter accusations and smashed china. Tessa must fight for her career—and resist her attraction to Max, the man she once loved and who now holds the power to destroy her.

Click on title below for link to Amazon page:

Secrets of a Soprano

Teresa Foscari, La Divina, the world’s most notorious opera star, has come to London for the season to perform at the Tavistock Theatre.  It’s not only her magnificent voice that’s filling the theatre every night, but her reputation for throwing objects and having a notorious string of lovers, including Bonaparte himself.  In reality, Teresa was born Tessa Birkett, and most of her reputation was fabricated by her late husband, who encouraged her diva persona.  While his management catapulted her to the heights of stardom, he was also a cheat, and a thief.

Max Hawthorne, Viscount Allerton, loves opera and opera singers.  He is dismayed to find that Teresa is contracted to his competitor, and his new state-of-the-art theatre is suffering while everyone is flocking to the Tavistock.  When Max goes to see her perform, he wonders if Teresa is possibly the young singer he fell in love with over a decade ago, when he was just nineteen.  That affair ended very badly, and Max has never forgiven Tessa for breaking his heart.

When it turns out that Teresa is, in fact, his youthful first love, and she refuses to perform at a benefit he is hosting, the normally honorable Max takes underhanded steps to smear her reputation.  Soon the toast of the town is being jeered instead of feted, and her income dwindles, as there are no more private parties where she is invited to perform.

At first, Max and Teresa are icily polite to each other, but soon the diva emerges, along with her penchant for throwing objects.  I have to admit that this really bothered me.  While it’s true, Teresa’s late husband encouraged this behavior, I can’t believe that she had no control over hurling crockery or screaming.  I also had a hard time dealing with a dishonorable man, one who would deliberately ruin a woman’s livelihood.  Yet, when Max realizes how bad a shape Teresa’s finances are in, he is remorseful and begins to make amends.

Eventually the couple discovers that neither betrayed the other years ago.  Max is eager to put aside all his past bitterness and to try to make a new beginning, as he still has very strong feelings for Teresa, but she has another secret, and it’s one that holds her back from finding lasting happiness.

SECRETS OF A SOPRANO is a very unusual book in many ways.  It’s not often that you read about a titled lord owning and being involved directly in the theatre.  Aside from his one big misstep, I do like Max.  I like that he immediately made amends when he realized what a big mistake he made.  He’s also a bit insecure,  which I found makes him human and more appealing.  Teresa’s sexual reputation was a result of her late husband’s machinations, and she really lived quite a moral life.  I did find her temper to be very off-putting, though.  MIRANDA NEVILLE has written a book that covers a lot of high and low emotional situations.  It’s a well written, interesting story with complex characters, and it gives a glimpse into a fascinating component  of society not usually portrayed in historical romance.