Her Favorite Duke by Jess Michaels 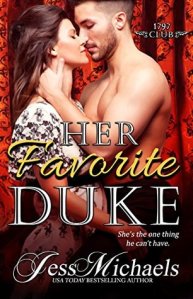 Simon Greene, Duke of Crestwood has been obsessed with Margaret Rylon for years. There is only one thing standing between them: her fiancé, who also happens to be his best friend. He is desperate not to destroy everything in his life by giving in to his desires, but when Meg and Simon are trapped alone together overnight during a storm, the resulting scandal not only breaks Meg’s existing engagement, but forces Simon to offer for her instead.

Margaret is sorry to have hurt her family and her fiancé, but all she’s ever wanted was Simon. Her determination to make a happy life with him is only heightened when they submit to passions that have long dwelled beneath the surface. But while Simon may give her his body, he withholds his heart out of guilt and fear of what a connection to her may expose.

And if he doesn’t learn to fight for her soon, they both may lose a chance at happiness.

Click on title below for direct Amazon buy link:
Her Favorite Duke (The 1797 Club Book 2)

HER FAVORITE DUKE is Book Two in the 1797 Club series, which is about several dukes or heirs to dukedoms who formed this club and have strong bonds of friendship.  In book one, we met James, who, upon coming into his title immediately engaged his young sister, Meg, to one of his closest friends, the Duke of Northfield.  Even then I could tell that all was not well with this arranged betrothal.

Meg was just sixteen when her brother James became duke.  His desire to protect Meg in case anything should happen to him led him to arrange her future marriage to Northfield, who is like a brother to him.  While Northfield and Meg have no love or affection toward each other, they agree to the engagement, seeing how much it means to James.  In truth, Meg has feelings for Simon, another of her brother’s closest friends, who loves her in return, though neither openly expresses their emotions.

Meg and Northfield let the years pass, treating each other with courtesy, but their feelings never evolve into anything more than a mild friendship.  Whenever Meg and Simon meet, though, it’s a different story – they dance, they laugh, they talk and delight in each other’s company.  Neither is willing to verbalize the truth or take any steps to break the engagement that is so wrong.  James begins more and more to push for a wedding date to be set, and finally Meg and Northfield agree.

As the wedding day draws closer, during a party at James’s home, Meg becomes upset and leaves.  Simon follows, wanting to comfort her, and they keep walking until an unexpected storm with unrelenting rain forces them to take shelter in a cottage.  They finally kiss and get a taste of the passion that has been teasing them for years, but Simon’s honor won’t let him take things further.  When they are found alone together, undressed, the truth doesn’t matter – they are compromised.  Now Simon and Meg must marry, something they both desperately wanted, so they should be ecstatic and on their way to happy ever after, but things are not so easy.

Instead of being relieved at not having to marry someone he doesn’t love, Northfield is hurt, angry, humiliated, and feeling betrayed.  His pride carries him through the announcement of the end of their engagement, then he leaves, apparently severing his friendship with both Simon and James, and causing the remaining members of the 1797 Club to choose sides.  Simon is now buried under guilt and feeling undeserving of any happiness, putting his new marriage in jeopardy.

The elephant in the room is the fact that no one, though many noticed it, was willing to talk about  the feelings between Meg and Simon.  The club is a group of men as close as brothers.  James is a loving and caring man who wants his sister to be happy.  Northfield is willing to accept a loveless convenient marriage.  Simon and Meg are burning for each other.  Yet not one person broaches the subject with James that this engagement is a mistake.  I realize that this is what obviously is the basis for this story, but it doesn’t make sense.  Even so, Jess Michaels wrote skillfully enough to pull me into the heartbreak and longing.  She shows us why Simon was as passive as he was, though I never came to understand why Meg wouldn’t talk to her brother.  Northfield’s reaction was very surprising, and I’m anticipating his story next, hoping that his friendships will be reconciled as he finds a genuine love.  I feel that HER FAVORITE DUKE is an enjoyable and heart-tugging read that will have you rooting for this star-crossed couple to find their happiness.