Review – Mad For the Marquess by Jess Russell 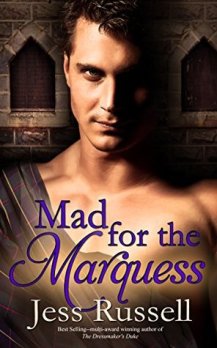 James Drake, Marquess of Devlin, had everything—until he was found covered in blood, standing over a dead girl. Now locked away in a madhouse, he has one short year to recover his memories and prove his sanity, or be condemned for life. But the demons inside Devlin’s head are far easier to battle than the evil surrounding him at Ballencrieff Asylum.

Anne Winton hardly expects to find her calling—or love—while working in a lunatic asylum. But despite all warnings, the “Mad Marquess” proves dangerously fascinating to innocent Anne. She vows to save him not only from his adversaries, but from himself.

Initially, Anne is only a pawn in Devlin’s bid to gain his freedom, until he begins to see her not just as a means to an end, but as a beautifully passionate woman. He must choose: compromise the woman he loves, or languish forever in hell.

Click on title below for direct Amazon buy link:
Mad for the Marquess (Reluctant Hearts Book 1)

Anne Winton is the orphaned daughter of a gentleman, who has spent the last fifteen years of her life at Ardemoore School, a charitable institution.  Anne has the gift of healing, which provided the excuse for another girl at the school to accuse her of witchcraft.  Now Anne is being sent to Ballencrieff Hall to act as a nurse and companion to two of the hall’s residents.  Ballencrieff is, in fact, an asylum, but for those who have some hope of recovery as opposed to those who are committed for life.  Anne enters to a chaotic scene of a handsome young man, covered with blood, being pursued by caretakers.  The man approaches Anne, and the two appear to be spellbound by each other for a few brief moments, until he is taken away.  Anne learns that the man is James Drake, known as the “Mad Marquess.”

James, Marquess Devlin, was committed to Ballencrieff for the period of a year by his father, the Duke of Malvern, after James was found covered in blood with a dead serving girl and no memory of what had happened.  James is a gifted painter, but lived a life full of drinking, drugs, and debauchery.  Now James is confined, all but starved, sometimes tortured, and drugged – although not with the recreational drugs he used to indulge in.  Though James struggles to remember, everything is working against him.  The year’s deadline is just a few months away, and if James is unable to prove his sanity, he’ll be confined forever.

It’s obvious that there is more going on behind the scene.  James has an enemy, someone who doesn’t want him to recover, and will do anything in his power to see James institutionalized for life, or dead.  Things appear to be looking up when James’s family provides a new personal caretaker, one genuinely concerned with his wellbeing.  James is also allowed to paint again, and he chooses Anne to model for him.  Anne soothes James, while at the same time rousing his passion, and she is far from indifferent to him.  As James makes favorable progress, his father, and another doctor come to evaluate him, to judge if he’s fit to be released.  The interview goes well, until James’ unknown enemy sabotages things, making it appear that James is, indeed, mad.  A frantic lie told by Anne in an attempt to save him does get him released, but also forces them into marriage.

While Anne and James have a definite chemistry, as well as a genuine liking for each other, neither was planning on marriage.  Now they are both uncertain and vulnerable, and they definitely tugged at my heartstrings.  The once self-assured James now has to prove his artistic ability, and he’s struggling.  He desperately wants his wife, yet feels he trapped her.  He’s also trying to be strong, and not fall into his old pattern of drugs, though he’s sorely tempted.  I admire the new man he’s becoming so much, and I felt his struggles along with him.  Anne has been thrust into a whole new world, and a society she’s not accustomed to.  She feels that she is the one who trapped James into marriage, and she desperately wants to win his love and fit into his life.

MAD FOR THE MARQUESS is a beautifully written love story, but it’s so much more.  The secondary characters and the scenes at the asylum are so vivid and realistic.  The horrible things done to James took my breath away.  The suspenseful part of the story was exciting to read, and I did consume this book in one sitting, as I couldn’t wait to see who wanted James destroyed, and why.  All the pieces began to fall into place in a way that made perfect sense, and led to a very satisfying outcome for two very deserving people.  Jess Russell has written a fantastic book, which held me captive through the whole journey, and which I’m recommending most highly.