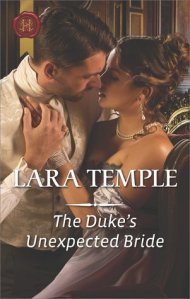 From country miss to London duchess!

Sophie Trevelyan has been enjoying her visit to London, even ifher closest companion is an overweight pug! Then she encounters the dashing Duke of Harcourt, who intrigues her more than is strictly proper

Max knows he must marry. He’s looking for the opposite of his high-spirited fiancee, who died some years ago, so he tries to keep his distance from bubbly Sophie. But when her life is endangered, Max feels compelled to rescue her with a very unexpected proposal!

Sophie Trevelyan has been summoned to town to visit her Aunt Minerva, aka Mad Minnie.  Sophie relishes the chance to leave her crowded home, though she suspects that her sojourn won’t be of a long duration.  Several of her relations have each had their turn, and have soon been sent back to the country by Aunt Minerva, who finds some fault with them.  Sophie is determined to at least hold the record for longest stay, and if that means she has to find a way to coax Minerva’s lazy pug, Marmaduke, out for a walk, she’ll do it.

Surprisingly, Sophie is able to lure Marmaduke outside, and even more shocking, he finds that he has a liking for chasing birds.  His exuberance almost has him barreling into a gentleman and lady out for a stroll.  Unbeknownst to Sophie, the gentleman is Max, Duke of Harcourt, and his sister Hetty, and they are neighbors of her aunt.  Sophie happily chatters away, charming Hetty, while leaving the straight laced duke both attracted and appalled by her outgoing friendliness.

Max’s sister Hetty is in town to help him find a wife – a proper wife with a pedigree who will always behave with decorum.  Max promised his father to marry by age thirty-one, and the deadline is approaching.  While a young man, Max was engaged to, and thought himself in love with, Serena, an outgoing and unconventional young lady.  That relationship turned out to be disastrous and ended tragically with Serena’s death.  Since then, Max has been a model of decorum, and is determined that his marriage will be tranquil and civilized, and love is definitely not a requirement.  Still, Max is drawn to Sophie despite himself.  As they continue to meet, he finds himself falling for her.  When a sticky situation happens, Max impulsively declares them engaged.

I enjoyed reading this story so much!  I loved seeing the ever proper Max shaken out of his ducal doldrums.  It was obvious that he’s a good man who was scarred by his previous fiancée’s actions and was trying to do the right thing, even at the expense of his own happiness.  Sophie was pure delight, and her honesty and joie de vivre brought light and fun into Max’s life.  The developing romance is very sweet, while their attraction is steamy.  The lazy pug added some smileworthy moments, and a twist near the end added some drama.  THE DUKE’S UNEXPECTED BRIDE was excellent entertainment from beginning to end and was a joy to read.

As originally reviewed at The Romance Reviews