Review – Once Upon a Maiden Lane by Elizabeth Hoyt 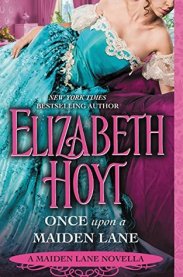 Miss Mary Whitsun is far too intelligent to fall for the rakish charms of a handsome aristocrat. But when the gentleman in question approaches her in a bookshop, mistaking her for his fiancée, Lady Johanna Albright, the flirtatious encounter only raises more questions. Could Mary, a servant raised in a St Giles orphanage, actually be Lady Joanna’s long-lost twin sister? If so, Mary has been betrothed since birth—to the rakishly handsome artistocrat himself.

Henry Collins, Viscount Blackwell, is far too intrigued by Mary to let her go so easily. He’s drawn to her sharp mind, indomitable spirit, and the fiery way in which she dismisses him—ladies simply don’t dismiss Lord Blackwell. But as Mary makes her first hesitant steps into society, she can’t help but wonder if she truly has a place in Henry’s world—or in his heart.

Mary Whitsun was left at the foundling home in St. Giles as an infant, and has worked as a nursemaid for Lord and Lady Caire since she was fourteen years old.  Now at age twenty, she’s enjoying a free day by perusing the books in a store, deciding which treasure she’ll buy.  She’s approached very familiarly by one gentleman, then another, who call her Joanna, and tease her about her clothes.  Eventually, they realize she is not their friend Joanna, and they start remembering the story from twenty years ago.  Twin daughters of the Earl of Angrove, Cecilia and Joanna, were kidnapped, but only Joanna was recovered.  Certain that they’ve located the long missing twin, they try to convince Mary, who believes they are only playing a cruel joke.  She hurries away, but the gentleman have her followed.  Meanwhile, they rush to the home of the Earl of Angrove to tell him the news.

Both of the gentlemen from the bookstore have a vested interest in Mary actually being Cecilia.  Henry Collins, Viscount Blackwell, was betrothed at birth to the oldest daughter, who would be Cecilia.  With Cecilia out of the picture, his future wife defaults to Joanna, who is like a sister to him.  In the short time he spent with Mary, he found himself very attracted to her crisp personality and would very much like to get to know her better.  The second gentleman, John, has a distinct preference for Joanna, and she for him.

Mary can’t believe it when the very next day, she is summoned to meet with guests, none other than the Countess Angrove, her mother, and her daughter, Joanna, who is the mirror image of Mary.  They have no doubt about Mary being the long lost Cecilia, and make immediate plans, to have her brought into their home and to learn all the arts of being a proper society lady.  It seems like a fairytale, as Mary / Cecilia is thrust into a whole new world.

Mary’s new mother, grandmother, and sister treat her lovingly, and as she is learning how to act and dance, she also learns that she is betrothed to Henry, the man from the bookstore.  They have a chemistry that sizzles, and they greatly enjoy being around each other.  Both look forward to Mary’s debut into society and to their upcoming marriage.  Aside from the apparent disinterest of Mary’s father, everything is perfect.  Until someone starts trying to kill Mary.  Until a third woman shows up at Mary’s debut ball, claiming that she is Cecilia, and that she has proof.  And she looks exactly like Joanna and Mary….

Henry impressed me right from the start because of his lack of snobbishness over Mary’s humble upbringing and working as a nursemaid.  He was willing to do his duty and honor the arrangement his father made, but he didn’t want to marry a woman who was in love with someone else.  He shows what he’s made of when he decides that he’ll marry Mary, no matter who she really is, even under threat of being cut off by his father.  Though Mary’s world may come crashing down, she handles it all with dignity and strength.  I loved both these characters and badly wanted them to find a way to be together.

ONCE UPON A MAIDEN LANE packs a lot into a novella – there is intrigue, plot twists, romance, and steam.  I loved the glimpses of a few beloved old friends from previous Maiden Lane books, and I found this quick read engrossing, exciting, and very satisfactory.