Review – If Ever I Should Love You by Cathy Maxwell 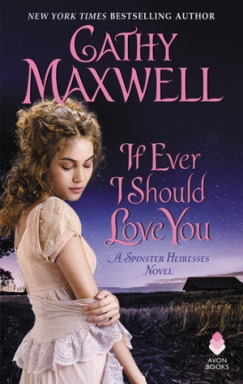 Once upon a time there were three young ladies who, despite their fortunes, had been on the Marriage Mart a bit too long. They were known as the “Spinster Heiresses” . . .

He’s inherited a title, but not a penny to speak of, so the Earl of Rochdale knows he must find a wife—preferably one tolerably pretty and good-tempered, but definitely wealthy, and willing to exchange her fortune for his family name.

His choice: Leonie Charnock, one of the season’s “Spinster Heiresses.” Years before, the earl had saved the dark-eyed beauty’s reputation, and she is still breathtakingly lovely, leading Rochdale to hope that their marriage will be more than in name only.

However, Leonie doesn’t want to be anyone’s wife. Nearly destroyed by the secrets in her past, Leonie agrees to their union with one condition: there will be a wedding but no bedding. But it’s a condition the new Countess Rochdale isn’t sure even she can keep . . .

Roman Gilchrist has unexpectedly inherited a title, but unfortunately, no wealth to go with it.  The new Earl of Rochdale not only has an estate in desperate need of funds, but has inherited his predecessor’s debts, as well.  Roman is informed that there are three ladies, dubbed as “The Spinster Heiresses,” who may be amenable to marriage.  When Roman learns that one of the heiresses is Leonie Charnock, he is definitely interested.  He and Leonie have a history, going back six years, when he was a soldier, and she was living in India with her parents.  Roman feels that Leonie owes him a debt, and he intends to pursue her to claim it.

Leonie is living an unhappy life since her return from India six years ago.  When she was just seventeen, she unwisely dangled two men on a string, one of them being Roman.  She finally chose to elope with the other man, Arthur, but changed her mind at the last moment.  Arthur objected, and his actions caused one crime which led to another, which led to certain ruin for Leonie.  Roman intervened, taking the blame, though he was innocent, and losing his career as a soldier, and his reputation in the process.  Meanwhile, Leonie and her parents scurried home to England.  Though she’s unhappy living with her indifferent parents, Leonie has no desire to marry, unless it’s a marriage in name only.  Still, when Roman returns, and approaches her, she knows that she owes him a debt.  Her father accepts Roman’s suit, and her fate is sealed.  Though she continually tries to force Roman to agree that it’s to be a “white” marriage, he never consents to this.

Surprisingly, Roman’s patience and skill overcome Leonie’s fears about physical intimacy, and they start their married life passionately and satisfyingly.  Roman even feels that the love he felt for young Leonie from six years ago never died.  This brief interlude of happiness is very short lived, as it turns out that there is another secret Leonie is hiding, an addiction that she, herself, doesn’t recognize for what it is.  As the situation becomes clear to Roman, he is horrified, and considers putting Leonie aside.

IF EVER I SHOULD LOVE YOU is not an easy or lighthearted read.  It is very real and intense and deals seriously with a subject often glossed over in typical historical romances.  Leonie’s addiction makes her extremely unlikeable in certain situations – there were many times throughout the book, when I felt she could not be redeemed.  I even railed at her for not being able to see the truth about herself.  While Roman is definitely the wronged party here, both in the present and the past, he is not a perfect or blameless character either.  He intentionally lied to Leonie about his estate, painting a much rosier picture than the real sad state of affairs.  Both of these characters had to show strength and growth, and make a solid commitment to each other and their future in order to find their way to the possibility of happiness.  Their journey is not easy or quick, and there are failures along the way.  Though at times this was an uncomfortable read, and I became frustrated with their failings, I do believe Leonie and Roman earned their happy ever after.

*See Spoiler after rating below if you wish to see a possible “trigger” alert.

*Spoiler Alert – Please only read further if you wish to learn details of the book which may be “triggers” for some readers.

Be advised that this book contains rape as well as alcohol addiction, along with its accompanying effects.