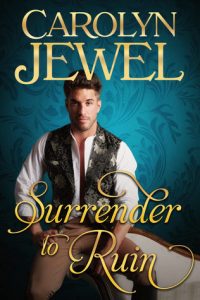 Her beauty is divine. His heart yearns for another. Will attempted revenge result in true love?

Emily is the last unmarried Sinclair sister. For all her spellbinding beauty, she’s never been able to clear a certain man from her head and her heart. He’s made it clear there’s no hope, and now he’s about to marry her best friend.

The Earl of Bracebridge knows how to hold a grudge. The former prizefighter turned disreputable nobleman hoped to marry Emily’s sister until she was forced to wed another. After his hopes for a suitable marriage are dashed once again, he seizes the chance to settle the score with Thomas Sinclair by eloping with Emily and consigning them both to a union without love.

Emily knows Bracebridge loves another, but every time they’re alone, sparks fly. Can Bracebridge get past his heartbreak to realize the perfect woman didn’t get away, she’s already his wife?

Emily Sinclair’s father has sold and gambled away everything, even their home.  Emily is all that he has left, so he’s arranged to marry her off against her will.  Devon Carlisle, Earl of Bracebridge, bought up Mr. Sinclair’s gaming vowels when he learned of them, and proceeds to his home to confront him.  After a heated argument, as Devon is leaving, he encounters the odious man who plans to marry Emily.  Devon makes the decision that he will marry Emily himself, thus saving her from a horrible marriage, and thwarting his enemy, her father.

The problem is that Emily and Devon have a history, and it’s not a happy or friendly one.  Devon was deeply in love with Anne, Emily’s older sister, and planned to marry her.  Anne found herself in a compromising situation with another man, who happened to be one of Devon’s best friends, and was forced to marry him.  Anne and her husband eventually came to love each other and have a very happy and solid marriage.  Meanwhile, Emily has always been in love with Devon, who only scorned her and thought her vain and shallow, while never really knowing her.  He can’t deny, however, that he has always lusted after her.

Devon and Emily race to Scotland to be married, and have no expectations of finding any happiness.  Devon is still devoted to Anne, whom he thinks about constantly, and Emily is aware that Devon will never love her, and stoically accepts this.  They do connect on a basic, physical level in a big way.  Their chemistry in the bedroom is off the charts, while during the day Devon is polite but distant, and Emily hides her broken heart behind a brilliant smile.

Devon is a former fighter, as he never expected to inherit the title with several older brothers in line ahead of him.  He’s a large, muscular man, who Emily delights in calling a brute, though she loves the rough side of him.  Devon can’t get enough of Emily sexually, though he resents the physical allure she has for him. As he feels that he’s being unfaithful somehow to his true love, Anne, he sometimes acts cruel, or just disinterested in Emily during the day.  He even invites friends to his home, including a former lover, who takes pleasure in belittling Emily.

Emily enjoys her nights with Devon, but doesn’t expect or even try to win his love.  Though she’s nothing like the vain and shallow woman Devon thinks her to be, she is very hopeless and undemanding.  I kept wanting to urge her to rail at him, or to try to make him love her, but she kept her deepest emotions hidden behind her placid expression.  She just accepted that Devon would always love her sister, and that was just the way it was going to be.

SURRENDER TO RUIN was a somewhat difficult read because of the seeming hopelessness of the situation.  Devon’s love has lasted for years, and I hated his unwillingness to give it up.  Finally his eyes are opened, but it may be too late, as Emily is offered sanctuary by her brother-in-law, and has decided that she may be better off living away from Devon.  This couple’s possible happy ending doesn’t come easily at all, and they both suffer much pain and heartache along the (decidedly steamy) way.