Review – The Earl Most Likely by Jane Goodger 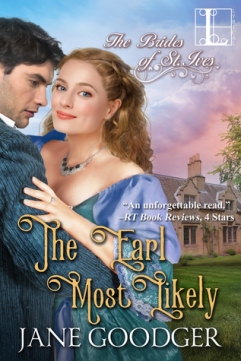 The Brides of St. Ives

The picturesque seaside town of St. Ives is home to all manner of treasures . . .

It’s not every day a young woman is offered ten thousand pounds for a few month’s work—especially the plain, shy daughter of a tin mine owner. The only thing special about Harriet Anderson is her extraordinary memory for even the smallest, most obscure detail. So when she’s asked by a gentleman to help restore his once magnificent ancestral home, she simply can’t refuse, no matter how scandalous the position. The money will mean freedom from her callous parents, and a life of independence. Harriet doesn’t imagine dreaming of anything more . . .

Augustus Lawton, Lord Berkley, cares about only one thing: restoring his beloved Costille House to its former, historically correct, glory. His late wife had taken great vindictive delight in transforming the old castle into a modern Victorian nightmare. Harriet’s remarkable memory will be invaluable in repairing it—and in helping him solve his wife’s murder. Yet as they work together, Augustus finds that besides her uncanny gift, Harriet possesses other priceless qualities. And as the castle’s beauty is gradually revealed, he can’t help noticing, so is hers . . .

No one seems to notice Harriet Anderson, because her older sister, Clara, is one of the most beautiful women around.  Even her parents focus all their attention on Clara, hoping she’ll make a successful marriage that will elevate their family status in society.  The Andersons obtained their wealth from a tin mine, and the girls’ mother is a truly awful social climber.  Harriet is shy to begin with, but due to her mother’s constant belittling, she has withdrawn even further, only feeling at ease with her sister and her small circle of friends.  Harriet does have a unique talent – a photographic memory.  When the Earl of Berkley overhears Harriet and her friends playing a game which tests the accuracy of Harriet’s memory, he believes he’s found the answer to his prayers.

Augustus Lawton, Earl of Berkley, is widowed, and his brief arranged marriage was a farce.  When his new bride showed her contempt for him, he left her at his beloved Costille House and traveled to America for two years.  When he returned home, determined to confront his bride, he found that she had transformed his historic home into a modern feminine frilly nightmare.  Shortly after, his wife dies, and Berkley is determined to restore his home to its previous glory, only to find that his wife burned the detailed plans, and he is clueless as to how to proceed.  He asks Harriet if she had ever toured his home while it was open, and it happens that she did – twice.  He makes her a financial offer that will allow her to live independently of her horrible parents if she will agree to oversee the restoration of Costille House, and she agrees.

Berkley is not very likeable at first.  Though he tells himself that he doesn’t really want his title, and enjoyed his time in America when he was just known as “Gus,” he still has a snobbishness that lets him look down on Harriet.  He knows it’s time for him to marry and father an heir, and he’s determined that only a blue blooded society lady with an impeccable family background will do. He also belittles Harriet in his own mind, calling her plain and skinny.

Strangely enough, after Harriet’s initial wariness wears off, she becomes at ease in Berkley’s company, and begins to amuse him.  Soon he begins to find little things about her attractive – her lips, her eyes, her hair, when it’s unbound.  Eventually he gives in to the temptation to steal a kiss, which Harriet greatly enjoys.  Though he struggles with his honor, Berkley finally asks Harriet to be his mistress, and she refuses.  However, she’s not averse to being his lover for the duration of time she will be working on his home’s restoration.

Harriet has no illusions about herself, and she’s aware that she will probably never receive a marriage proposal.  She also knows that she’s developed strong feelings for Berkley, and decides to enjoy passion while she has the opportunity.  They arrange their meetings at an abandoned cottage, and begin their no-strings, no-regrets affair.  Though Berkley is cynical about love, he finds that he is falling under Harriet’s spell, and he doesn’t think he can let his “Catalina” go.  I greatly enjoyed seeing the change in Berkley, even as he fights himself and what he thinks is correct and proper for his title.

I hate the treatment that Harriet received from her parents.  To them, she may well have been invisible.  They spared no expense for Clara, yet even left Harriet at home in the country with servants as they traveled to London.  It seems that no one could see Harriet’s beauty behind the shabby clothes and the severe hairstyle.  I love that Berkley’s eyes were finally opened to her, and the self confidence that it gave Harriet.

THE EARL MOST LIKELY is one of those books that I loved reading and devoured in one sitting.  I enjoyed Berkley’s character growth and Harriet’s blossoming.  Author Jane Goodger has written a well paced, engaging, and romantic story, which didn’t shy away from all the social hurdles that this couple will face if they are to have a future together.  I heartily recommend this well written and delightful book.