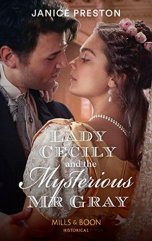 Love or family…How can she choose between them?Lady Cecily Beauchamp has always put her family first. Until she falls under the spell of the mysterious Zachary Gray–a man of Romany descent. Knowing her family will forbid their match, Cecily steels herself to do her duty and marry someone else. Only she finds herself irresistibly drawn to Zach as the spark between them ignites a passion neither can deny!

Lady Cecily Beauchamp has spent her life raising her widowed brother’s children and managing his household.  Now that Leo has remarried, Cecily has no desire to become the poor relation, and is pondering her future.  Although she is thirty years old, she’s still young enough to marry, and possibly have children of her own.  Cecily thinks about Lord Kilburn, the suitor whose proposal she refused a year ago, and wonders if she should renew their acquaintance.  She doesn’t love him, but perhaps he’s her best chance at marriage.  But Cecily’s attention is caught by a tall, dark, and handsome man — a man with whom a romance is forbidden.

Zachary Gray is attending the wedding of his friend’s sister into the powerful Beauchamp family, when he notices a beautiful woman deep in contemplation.  They strike up a conversation, and feel an instant rapport, which only increases over their next several meetings.  Being half Romany, Zach is aware that he’s not considered suitable for Cecily, truly not even as an acquaintance.  Still their attraction grows.  They are determined to stay away from each other, but can’t seem to do so.

As Cecily’s brothers begin to notice that she is often in Zach’s company, their opposition to the connection becomes stronger and more vocal.  Cecily is torn between taking the safe path and pursuing her suitor of a year ago, or risking losing her position in society as well as her family to follow her heart and a future with Zach.

I admit that I was very disappointed at first with Cecily’s failure to stand up to her brothers and her reluctance to immediately fully accept Zach.  However, upon seeing how society truly treated him, calling him a gypsy and worse, and treating him as less than human, I began to understand how drastically her life would change.  As Cecily’s brothers, Leo and Vernon, were heroes of the last two books in this series, it did pain me to see them so hard headed and reluctant to even consider Zach, and to watch them use their influence to separate the couple.

LADY CECILY AND THE MYSTERIOUS MR. GRAY is more than a lighthearted romance, as it delves into people’s prejudices and fear of what and who is different from them.  Zach is a beautiful person, despite the abuse he suffered and the things he lost.  He’s a gentle soul who has his own demons to face and choices to make if he is to have any chance of a future with Cecily.  I love that Cecily had the full support of her brother’s wives right from the get go.  Though he was slow getting there, Leo eventually showed his true nature and what he was made of when the chips were down, and I felt he nicely redeemed himself.  I think Cecily and Zach’s happily-ever-after was sweeter because it was so hard won, and their passionate love story concludes with a romantic scene that had me smiling, if a bit teary eyed.    ~Rose