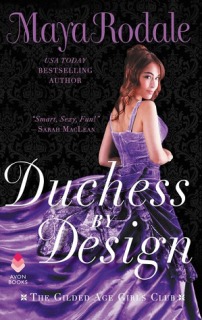 In the first novel of Maya Rodale’s enthralling new series, an English duke vows to make an American seamstress his duchess…

In Gilded Age Manhattan, anything can happen…

Seeking a wealthy American bride who can save his family’s estate, Brandon Fiennes, the duke of Kingston, is a rogue determined to do the right thing. But his search for an heiress goes deliciously awry when an enchanting seamstress tumbles into his arms instead.

…and true love is always in fashion

Miss Adeline Black aspires to be a fashionable dressmaker—nota duchess—and not even an impossibly seductive duke will distract her. But Kingston makes an offer she can’t refuse: join him at society events to display her gowns and advise him on which heiresses are duchess material. It’s the perfect plan—as long as they resist temptation, avoid a scandal, and above all do not lose their hearts.

It’s 1895, and New York City is abuzz with talk about the young and handsome Duke of Kingston visiting from England, rumored to be looking for a wealthy bride.  When the duke, Brandon, discovered just what a financial shambles he inherited from his father, he decided to sacrifice his own desires and marry for money.  Since English heiresses are few and far between, he travels to America, where they are plentiful.  When Brandon literally bumps into a beautiful young lady in his own hotel, he’s intrigued by her wit and flirtatiousness.  When the mystery lady enters the room next to his own, which Brandon knows belongs to heiress Harriet Burnett, Brandon feels his prayers have been answered.  Imagine finding an heiress who not only can save him financially, but one who appeals to him physically and intellectually!

Adeline Black is a talented seamstress with big dreams and ambitions.  She is filling in today for her employer in fitting Harriet Burnett, and plans to showcase her own design ideas, hoping the heiress will like them.  She accidentally runs into Brandon, and correctly assumes that he is the duke who has everyone in a tizzy.  Rather than being intimidated, Adeline takes the once in a lifetime opportunity to share some flirtatious banter, then moves on to her appointment, not aware that the duke believes that she is Harriet.  Much to Adeline’s delight, Harriet is impressed with her designs, (pockets, you know) and asks that Harriet be the one to work on her wardrobe.

Adeline encounters Brandon several more times, enjoying their meetings, but determined not to become the plaything of a wealthy man, and still not realizing that he believes her an heiress.  When Brandon eventually learns the truth, he is crushed to find his dreams shattered.  Adeline cannot be a part of his future.  To make the situation worse, Brandon’s attentions have caused gossip and speculation, and Adeline’s employer chooses to fire her.  Though Brandon longs to rescue her, Adeline refuses his help.

Harriet, meanwhile, plays a major part of this story, both as a matchmaker, and as a modern thinking woman who is generous enough to help Adeline.  There is no doubt that Brandon and Adeline have fallen hard for each other, but they live not only in different countries, but different worlds.  I love how author Maya Rodale wrote these characters.  Adeline is so strong – she’s not looking for a prince to come and rescue her – she wants to make her own future and be a success in her own right.  She is intelligent enough to see the difficult position Brandon is in, and doesn’t blame him for the choices he has to make.  Yet, she challenges him to think outside tradition and to change the world, a little at a time.  Brandon is not a snob, and does not look down on Adeline because she is of the working class.  He loves her and wants her to be a permanent part of his life, but is willing to sacrifice his own happiness to ensure that his family is secure.

Though their situation is sad and seemingly hopeless, I love the relationship between the duke and the seamstress.  It’s fun, teasing, flirty, and delightful, without Brandon seeming rakish, or Adeline seeming too brash or bold.  Their chemistry is definitely steamy, and I rooted for them to find a way to be together where they both could win.  DUCHESS BY DESIGN was a joy to read, and I’m happy to recommend it to all readers who enjoy historical romance, but in particular, those who enjoy a heroine who is strong, and a hero who is determined.    ~Rose