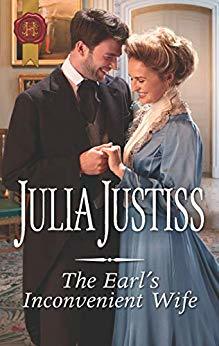 The obvious solution:  A marriage of convenience!

Temperance Lattimar is too scandalous for a Season, until finally she’s sponsored by Lady Sayleford. The whole charade feels wrong when she doesn’t want a husband, but Temper feels awful when MP and aristocrat Gifford Newell is appointed to “protect” her at society events. With her past, she knows she’s not an ideal wife…but then a marriage of convenience to Giff becomes the only option!

Temperance “Temper” Lattimar has never even had a season, yet is already considered scandalous due to being part of the “Vraux Miscellany.”   Her mother, a noted beauty, had affairs which resulted in children being sired by different men, though her husband accepted them as his own.  Now that Temper is twenty two years old, her father is insistent that she finally make her debut.  Temper has no plans to ever marry.  An incident from her past, as well as seeing her parents’ dysfunctional relationship has convinced her that she’ll be happy living her life unwed.  She hopes that by agreeing to one season, her father will be appeased, then turn over her dowry directly to her so that she can live out her dream of travelling the world.

Gifford “Giff” Newell is the second son of the Earl of Fensworth, and is a dedicated politician.  He is too busy enjoying the favors of many women to even think about marriage, though he supposes he’ll have to settle down one day, with a respectable lady who can help further his career.  Giff has known Temper forever, as she’s the younger sister of his best friend, Greg.  Truth be told, since Temper has grown up and become an outstandingly beautiful woman, he’s been fighting his attraction for her while trying to maintain the easy friendship they’ve always shared.  Knowing the difficulties she’ll face in society, Giff convinces his godmother, the very respectable Lady Sayleford, to sponsor her, hoping that will open some doors for Temper.  Lady Sayleford agrees, but part of the deal is that Giff must be on hand also, to ensure that Temper is kept safe from unwanted advances by unscrupulous men thinking she’s exactly the same as her scandalous mother.

Giff knows the constant proximity to Temper is going to be difficult, and that he’s going to have to keep control of his desire for her.  He’s also experienced enough to know that Temper feels greatly attracted to him, as well.  The season begins, and Temper has some successes, as well as some setbacks.  When a spiteful young lady arranges for Temper and Giff to be found in a compromising situation, Giff has no honorable alternative, and offers marriage.  Temper will only accept a white (no sex) marriage, and since Giff has no need of heirs, he agrees.  Giff will also allow Temper to travel as she’s dreamed, so they enter into a no strings marriage of convenience.

One thing I particularly loved about this couple was their genuine friendship and liking for each other.  They talked openly and frankly, and were very protective and caring of the other.  Giff didn’t hide the fact that he desired Temper, but he made it clear to her that he would abide by their agreement unless she chose to change it.  When a tragedy happens on their wedding day, their circumstances change so drastically, that they know all their careful plans are about to become worthless.  Both Temper and Giff rise to the new challenges, and it brings them even closer to each other, as well as showing their strength of character.  Temper finally feels ready to face down her demons and take a chance on having a real marriage.  While Giff doesn’t know all the facts about Temper’s fear of intimacy, his patience and care of her are swoonworthy.

THE EARL’S INCONVENIENT WIFE is a warm and romantic story with a hero and heroine I truly liked and admired.  I also enjoyed learning more about the sad marriage between Temper’s parents – I could see now that her father was never intentionally cruel, and I better understood her mother’s actions.  There was also another couple of characters introduced that I would love to see find a happy ever after together.  If you enjoy a genuine romance, and the tropes of friends-to-lovers and marriage of convenience (two of my favorites in one book,) with unconventional, but strong characters, I believe you’ll savor this book, as I did.    ~Rose