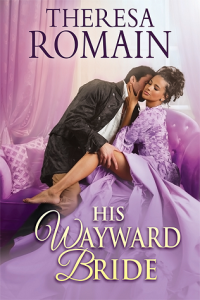 Though their horse-racing family is as troubled as it is talented, all of the Chandler siblings have found love…except eldest brother Jonah. Married four years ago and abandoned after his wedding night, single-minded Jonah now spends his days training Thoroughbreds—while his lost bride is a family mystery no one dares discuss.

And that’s just the way Jonah and his wife, Irene, want it.

The biracial daughter of a seamstress and a con artist, Irene has built a secret career as a spy and pickpocket who helps troubled women. By day she works as a teacher at Mrs. Brodie’s Academy for Exceptional Young Ladies; in spare moments, she takes on missions that carry her everywhere from London’s elite heart to its most dangerous corners.

Jonah agreed to this arrangement for four years, until Irene’s family fortunes were made. After surviving on passionate secret meetings and stolen days together, now it’s time to begin the marriage so long delayed. But as these two independent souls begin to build a life together, family obligations and old scandals threaten to tear them apart…

Irene and Jonah Chandler married four years ago, a love match, but with the unusual agreement that they would live apart for four years.  During that time, Jonah pursued training and raising thoroughbred horses, while Irene was a teacher at Mrs. Brodie’s Academy for Exceptional Young Ladies.  Irene also accepted assignments on the side, which involved spying and theft, but benefitted those who had been taken advantage of, or were in need of help.  Irene and Jonah met whenever they could, sharing some stolen moments away from their busy lives.

Though Jonah agreed to the initial separation, he is more than ready to have a full time marriage.  He’s lonely, and he wants Irene with him always.  He is also anxious to begin to create his own family, as his own relationship with his father has always been somewhat ambivalent.  While Irene wants to spend her life with Jonah, she is dealing with her own family crises, as well as her multiple careers.  Irene’s mother is a seamstress, but her father is a con man, leaving a trail of destruction in his wake.  Irene has taken it upon herself to make restitution for her father’s deeds, which are not her doing.  Irene is also providing support for her mother, and her resources are stretched extremely thin, to say the least.

As Jonah eagerly begins discussing their future, Irene becomes more conflicted.  When he realizes that Irene may be content to continue their haphazard, occasional marriage, he comes to see that he can no longer live that way.  Though it breaks his own heart, Jonah lets Irene know that she has to come to a decision – she’s either all in, or they have to find a way to end the marriage.  What I appreciated is that Jonah was not overbearing or demanding.  He expressed his love and caring for Irene, and let her know his true feelings about how alone he was.  Jonah and his family went above and beyond to help Irene’s struggling family, even her good-for-nothing father.

I did feel that HIS WAYWARD BRIDE suffered by not showing Jonah and Irene meeting and falling in love.  That’s such an integral and important part of their relationship, and I wanted to know all about it.  This story picks up after four years, and while there were some references to how they met, it just felt as if I had missed the most important part.  I had to admire Irene’s character as evidenced by her compulsion to right her father’s wrongs, and her support of her family.  It seemed, though, that her strength of character outweighed her love and her commitment to her marriage.

I began to feel that there was no way this couple could ever find a way to manage to live a full life together, yet fulfill both their needs.  I shouldn’t have worried, as Theresa Romain managed to create a compromise which wrapped the conflict up nicely.  There was also a very unexpected surprise in regard to Irene’s heritage which provided a delightful twist.  HIS WAYWARD BRIDE is very well written, and delves into some complicated relationships and emotions, making for an engrossing read that I couldn’t put down until I had finished it.    ~Rose