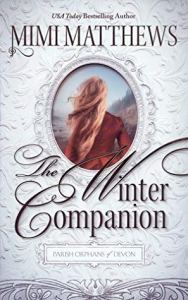 She Needed to be Seen…

As a lady’s companion, Clara Hartwright never receives much attention from anyone. And that’s precisely how she likes it. With a stormy past, and an unconventional plan for her future, it’s far safer to remain invisible. But when her new employer is invited to a month-long holiday at a remote coastal abbey, Clara discovers that she may not be as invisible as she’d hoped. At least, not as far as one gentleman is concerned.

He Wanted to be Heard…

Neville Cross has always been more comfortable with animals than people. An accident in his youth has left him with a brain injury that affects his speech. Forming the words to speak to his childhood friends is difficult enough. Finding the right things to say to a lovely young lady’s companion seems downright impossible. But Miss Hartwright is no ordinary companion. In fact, there may not be anything ordinary about her at all.

During a bleak Devon winter, two sensitive souls forge an unexpected friendship. But when Clara needs him most, will Neville find the courage to face his fears? Or is saying goodbye to her the most heroic thing he can do?

Neville Cross and his three friends, Justin, Tom, and Alex, were raised together at the orphanage in Devon, becoming as close as brothers.  Their adventures often took them to the dangerous cliffs, where they fearlessly played – until one day, when Neville had a serious accident.  Neville fell, injuring his head, and falling into the sea.  Alex rescued him, but the wound left lasting damage.  Now, thirty-one years old, Neville lives at Justin’s home, training to become his land steward when the current man retires.  Though he’s competent to do the work, his true calling is with animals, and he spends much time in the stable with the horses.  Neville is fully functioning, except for his speech, and the occasional lapse in his attention.  And when a beautiful young lady comes to the stables looking for him, it seems that his ability to speak has deserted him completely.

Clara Hartwright is the new companion to Mrs. Bainbridge, currently a guest at Justin’s home.  When Clara’s last employer passed away, she left an elderly pug, Bertie, whom Clara rescued after the family wanted him destroyed.  Clara now seeks a safe spot for him in the stables.  The tall, handsome, but oddly silent man, who appears to be Mr. Cross, finally is able to speak to assure her that the little dog will be kept safe.

Tom and Alex, along with their wives and additional family have come to spend three weeks at Justin’s home for Christmas, reuniting all four orphans.  Justin has made sure that Neville is aware that he has to spend time with them in the house, and not hide out in the stable.  Though Neville has no problem communicating with his three friends, and has become quite comfortable with their wives, he still is uncomfortable around those he doesn’t know.  That’s when he struggles to find words.  He’s eager to assure Clara, however, that her little dog is fine, and soon Bertie is the common ground for them to become friends and better acquainted.

A shared love of animals, some walks along the beach, and a shared tender kiss make it obvious that Clara and Neville are smitten with each other.  Despite their growing romance, it seems that any chance of a future together is very small.  Neville feels his limitations strongly, and believes that he can’t leave Devon, that he must stay in his safe environment.  He feels he’s incapable of anything further, and how can that possibly provide a life for Clara?  She also feels hopeless, as Clara is obligated to work and use the bulk of her salary to pay for her brother’s education.  Guilt over a long ago presumed transgression, which had repercussions for her family, drives Clara to put her brother first.

Neville is one of those men you just want to climb into the book and hug!  His care, his tenderness with animals, his kindness and gentleness make him a person to genuinely admire.  He’s so well written, that I could feel his frustration every time the words he wanted to say so badly just wouldn’t come out.  He’s an intelligent man, it’s just that the injury caused a lasting disconnect in his speech.  Clara is a woman who takes her responsibilities seriously, but still allows a tiny part of herself to dream.  I love how she didn’t see Neville as being inferior or deficient in any way.  When he struggled, she seemed, almost intuitively, to know what he was trying to communicate.  They appear to be perfect for each other.  Yet, when Clara is immediately summoned away on a family emergency, their interlude is over, and they won’t be seeing each other again.

THE WINTER COMPANION is yet another stellar romance from Mimi Matthews, whose talent for writing heartfelt stories with fully developed characters is awesome.  I felt that I knew Clara and Neville, and could feel their emotions and motivations.  The romance is genuine, warm, and touching, while the resolution is satisfying and believable.  I lived in this book as I read it, and also loved seeing the four boys, now grown men, reunited and as close as ever.  This is the final book of the Parish Orphans of Devon series, and it can be read as a standalone.  However, the previous three books are just as amazing, and I can heartily recommend the whole series.  The sign of a great book is wanting to read it again, and I plan to soon take a weekend and re-immerse myself in this whole wonderful series.    ~Rose