Review – How the Lady Was Won by Shana Galen 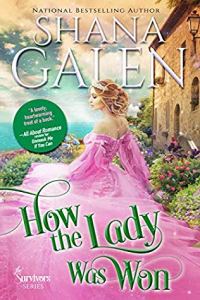 When a master of disguise marries a woman who sees right through him…
Lady Daphne, daughter of the Duke of Warcliffe, is one of the Three Suns. Society revolves around her. But there’s one person who doesn’t seem to know she’s alive—her own husband. Lady Daphne was thrilled to marry Colin FitzRoy, the son of her mother’s dear friend, seven years before. But then he left for the army, and their marriage never really had a chance. Now she’s in trouble, and Colin has reentered her life. She’s determined to refuse his help, especially after the way he’s treated her, but Colin can be persuasive…especially when he has her alone.

Baring it all is part of the seduction.
Colin FitzRoy was known as The Pretender during the war. He’s an expert in the art of disguise, but even when he takes off the mask, he hides who he really is. Colin pretends he doesn’t have feelings, but when he’s thrust together with his estranged wife, his buried emotions resurface. Before long, Colin is juggling an elderly pug, a wife-hunting Scotsman, and a duplicitous street urchin in an effort to keep Daphne safe. But his greatest challenge is not only to seduce her but to win her heart.

Colin FitzRoy and Lady Daphne were married seven years ago when she was only eighteen and he was twenty-two.  They were basically strangers, as it was a marriage arranged by their mothers.  With both of them being inexperienced, their wedding night was a major disappointment.  Shortly after, Colin, a soldier, left for the continent, not returning for five and a half years.  Upon his return, he went to his father’s estate, where he stayed for many months, only recently returning to London.  In the years since she married, Daphne has become the equivalent of a grand dame (though she is still young) in society, known as one of The Three Suns, able to ruin a young lady with just a frown.

Since his return to town, Colin has been continually hounded by Daphne’s mother, urging him to contact Daphne, and to put their tattered marriage to rights, and intimating that Daphne is in trouble and needs his help.  Colin knows he has acted poorly, and that he can’t stay in this state of limbo forever.  Colin is a very self contained man, thanks to a lesson from a cruel grandfather when he was just a young boy.  The thought of being around his exuberant and emotional wife makes him break out in a cold sweat.  Still, if she’s in trouble, he will find a way to solve the problem.

Though Daphne’s position in society is secure, she is still the subject of cruel barbs regarding her absent husband.  Secretly she is hurt and angry that Colin has never contacted her, but she hides her feelings, acting as though his absence is of little importance.  She has something more pressing to deal with.  In truth, she is in serious trouble.  She has foolishly gambled with a powerful and dangerous man, and her exorbitant losses and the interest are amounts she can’t pay.  Her creditor, who has a murderous reputation, has threatened to physically get what’s due him if she doesn’t pay her debts.

When Colin finally confronts Daphne, she is justifiably angry.  When he offers his help, she refuses it.  There is no cordial reunion here.  Still, Daphne’s father, the Duke of Warcliffe, is a powerful man, and he’s determined that his daughter and her husband start living together and acting like a married couple.  Colin knows that crossing the duke is futile, so he agrees that they will live together.  And he’s determined to find out just what kind of trouble Daphne is in – all while maintaining a safe distance from her, of course.

What this couple didn’t count on was their strong desire and attraction for each other.  Though they are polar opposites, she wants words and feelings while he becomes nauseated at the mere mention of emotions, they can’t stay away from each other.  HOW THE LADY WAS WON takes us through Colin’s and Daphne’s journey as they eventually come to discover love.  The path is very rocky – there is the danger that Daphne is in, the secret that Daphne has kept for seven years, and Colin’s tangled fear of love and genuine intimacy.  Both characters have made mistakes, some substantial enough to make me actively dislike them for awhile.  I really hated Daphne’s phony society persona, and her foolishness in how she gambled.  As for Colin, he cruelly never answered even one of Daphne’s regular letters while he was away, and his actions in avoiding her on his return were humiliating.  Still, I forgave them and grew to love them as their characters grew.  Daphne owned up to her mistakes and took full responsibility.  Her intelligence allowed her to play a large part in rescuing herself, as well as seeing into Colin’s troubled personality, looking beyond her own feelings.  Colin was a tougher nut to crack.  Though honorable in wanting to protect Daphne, he also continued to run every time he started to get close to her.  It takes a life threatening situation to finally let him work through his issues, and realize what’s right in front of him.  The passion between this couple is super steamy, and some of the secondary characters, like Jasper, the masked problem solver, and Duncan, the bride-hunting Scot, added a whimsical touch to this sometimes intense story.  HOW THE LADY WAS WON is a book I thoroughly enjoyed and recommend, especially to those who enjoy a couple who battle their way to their happy ever after.    ~Rose

Note:  Though part of The Survivors Series, HOW THE LADY WAS WON easily reads as a standalone.