Blog Tour – The Colonel and the Enchantress by Paullett Golden – Review, Excerpt, and Giveaway 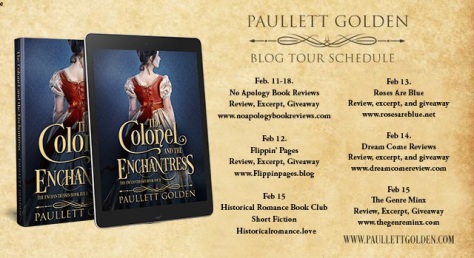 The Colonel and The Enchantress by Paullett Golden

Lady Mary Mowbrah, daughter of a duke, fell in love with a man beneath her station. When he leaves for war, determined to earn her hand as a hero, she promises to wait for him, never dreaming the man who returns will be different from the man who left.

​Colonel Duncan Starrett returns from war with honors, accolades, and a debilitating injury. As much as he still loves Lady Mary, he fears a future between them is now impossible.

​This is the love story of Mary and Duncan as they forge a future from the shadows of the past.

“You call me here, and yet you keep me waiting. Not an impressive impression,” she said.

As he limped into the room, the mantel clock chimed his punctuality.

He did not take a seat. She did not offer for him to sit. Lady Annick sat straight-backed, tall and intimidating even from a chair. One look at her churned his stomach and quelled his confidence. Between an army of Frenchmen and Lady Annick, he would take his chances with the Frenchmen.

The one humanizing factor was her cane. It posed in her hands, one hand on top of the other, gripping the gold handle. It might have been another intimidating factor, a weapon in the hands of a tyrant, but it humanized her, in his estimation. He looked down at his own cane as he favored his right leg. Surely her cane was no more an ornament than his. She was not old enough to need a crutch. Had she, too, been injured?

“Have you taken my measure? Sized the opposition?” she asked with an arch of a slender, black brow.

“Are you my opposition?” Feet hip width apart, he affected ease in his posture, limited only by the cane and the bruising of the leg.

“You tell me, young man. You are the one who has summoned me. Come to declare war? Peace? Your undying affection for my daughter? Your devotion and admiration to the Annick dukedom? Your apologies for bringing my daughter from a manor to a hovel?”

Smoothing his bristles, he swallowed his pride. Gulped may be more accurate.

“Your Grace, I’ve come to ask for your daughter’s hand in holy matrimony.”

The woman’s frown deepened, the creases around her mouth becoming more pronounced until she looked severe. “Is it because you injured your head or because you are a simpleton that you ask for my daughter’s hand when you have already wed her? Without my permission, I might add.”

Mary Mowbrah was just fifteen when she met Duncan Starrett, then nineteen.  For a year, they met secretly, falling in love, and dreaming of a future together.  Duncan’s family owns the estate next to Mary’s family’s ducal mansion, and he knows he will never be accepted as a suitor for a duke’s daughter.  Hoping to prove himself, he enlists in the army, seeking battles and glory.  Eventually, Duncan comes to learn the horrors of war, and loses all his romanticized ideas of it.  Still, he found he excelled at being a leader, and enjoyed the comradeship of his fellow soldiers.  Five years pass, and a badly injured Duncan is finally sent home to recover.

Mary has continued to dream of a future with Duncan, living for his occasional letters.  She is worried because she hasn’t heard from Duncan in months, when she and her brother, the duke, receive an invitation to tea at the Starrett home.  Duncan’s serious injury is on the mend, though he still isn’t fully recovered.  He didn’t want to meet Mary until he was able to stand on his own two feet.  When they see each other for the first time in years, they can’t take their eyes off each other.  It seems that the magic between them is still there.  Before they even have a chance to fully reconnect, Duncan suffers a major setback, a devastating one.  His pain, anger, and frustration cause him to push Mary away.

The doctors feel that Duncan should be able to recover, yet he can’t.  Finally, Duncan is tired of feeling sorry for himself, and begins a regimen of strenuous exercise, determined that he will push his body to its limits.  He meets with success, and finally progresses to the point where he can contact Mary again, and ask for her forgiveness for his behavior.  Though Duncan’s injury puts him at risk for the remainder of his life, he and Mary decide to marry, against the express wishes of her autocratic mother.  Their marriage begins happily enough, and certainly full of passion.  Duncan’s actions in the war have earned him a minor title and a lovely estate.

While Duncan was away at war, Mary grew up from a carefree young girl to a determined woman.  Though she hoped for a future with Duncan, she could also see a future on her own, with her own estate, perhaps setting up some sort of business which coincides with her love of horses.  When Duncan’s new estate has a sizable stable area, and he’s amenable to the business she dreamed of, it seems she’s about to have it all.

Things quickly seem to fall apart.  Though their physical relationship is steamy, during the day they are at odds.  Duncan takes full control of the horses and stables, driving himself to exhaustion, refusing Mary’s help, though she’s more than capable of helping.  Not realizing that he’s pushing her away, Mary feels again like the unwanted daughter who has no value.  In turn, she becomes more brittle, a lot like her cold and distant mother.  The situation turns disastrous, when, once again, Duncan suffers an injury, and once again, turns away from Mary.

There are so many layers to the characters in THE COLONEL AND THE ENCHANTRESS, that it’s more complex than just two people in love needing to find common ground.  Duncan is a wonderful man, but in truth, he had a touch of immaturity at times.  I can’t deny that his injuries and the resulting limitations were obviously very serious, but he was good at pouting.  Once he finally calmed down, he began to think and plan, things he’s very good at.  He also had some major insecurity about Mary’s lofty family, and how he never felt quite good enough.  I felt that Mary was the one who had to give the most in this relationship.  It hurt her to not feel an equal partner to Duncan.  She longed for a large family, and a feeling of belonging.  When hurt, she had a tendency to retreat to her icy persona.  There are many obstacles to overcome for Mary and Duncan, and their journey was very compelling, and often painful.  THE COLONEL AND THE ENCHANTRESS is a book that grabs your attention and takes you on a roller coaster ride of emotions.  I recommend it for readers who prefer their romance with plenty of drama, knowing that there is a happy ending, but the path getting there is far from easy.    ~Rose

Feb 11-18   – Prizes: autographed book of choice from any book in the series, bookmark of choice, magnet with book cover and quote of choice