Review – Sweet Rogue of Mine by Shana Galen 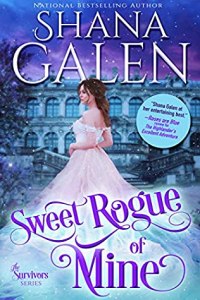 A sharpshooter who’s lost his sight…

When a stray pistol ball from the battlefield took Nash’s sight, it also took his entire identity. He’s retreated to his father’s county home to lick his wounds, but his drinking and isolation have only made things worse. When Nash’s father, a powerful earl, threatens to send Nash to an asylum, his former brothers-in-arms call in one of their own to set Nash back on the right course. Nash fears he’s fallen too far and perhaps ending it all is the best solution. Until he encounters a woman in the garden signing a bawdy tune at the top of her lungs.

An outcast who sees too much…

Prudence Howard has traveled the world with her missionary parents. But after the scandal she caused in Cairo, they’ve foisted her on a vicar in the small town of Milcroft and sailed to the Far East to evangelize without her. Pru doesn’t mean to cause trouble; it’s just that being good is so very hard. When she meets Nash Pope, she’s instantly intrigued. He might be hot-tempered, but he’s handsome and unusual and arouses her interest and passion like no one she’s ever met. He might not know he needs or even wants her help, but Pru has a plan to save him.

Together they glimpse a brighter future.

Nash is bewildered by the unconventional woman who keeps turning up on his doorstep. She tries to teach him night writing, claims a feral peacock is a momentous sign, and makes his toes curl when she kisses him. She refuses to give up on him. But though Nash finds it easy to believe in Pru, can he ever trust himself again?

AMAZON US BUY LINK: Sweet Rogue of Mine

Nash Pope is a member of Draven’s Dozen, a group of former soldiers who were part of an original group of thirty who accepted dangerous missions during the war.  Nash is a sharpshooter, who, in addition to his guilt over his wartime activities, suffered a terrible injury.  He has completely lost the sight of one eye, and almost all in the other.  All he sees now are vague shadows.  His PTSD and his bitterness over his blindness have caused him to strike out at everyone, including family and his fellow soldiers.  His father is unable to tolerate his behavior in town, so has sent him off to a somewhat ramshackle family estate in the country.  Nash has basically driven off all of the servants, and lives his life clutching a gun close to him, and losing himself in drink.  When his friend, Rowden, comes to visit, warning him that his father is considering having him institutionalized, Nash finally accepts that he must pull himself together, or face life in an asylum.  Nash does not want Rowden’s, or anyone’s, company, but he realizes that he does need help.  Then he encounters a stranger on his property, a female singing a bawdy song, seemingly unaffected by his rude behavior.

Prudence “Pru” Howard is the daughter of missionaries, who have left her behind in the care of the local vicar as they head off on a mission in the Far East.  A discretion in Pru’s past greatly disappointed her parents, who no longer want her to accompany them.  Pru’s plain looks and lack of wealth and status have left her basically friendless, so she spends her time doing chores in the vicar’s household or walking the countryside.  When Pru initially encounters Nash, she doesn’t realize that he is blind, and doesn’t treat him any differently, or deferentially, as the son of an earl.  When she later finds out about his affliction, she decides to go back to apologize for her behavior.  They end up talking about Pru’s sister, who is also blind, and who has learned a new method of reading, one where she uses her fingertips to “read” raised characters on paper.  Nash is intrigued enough to want Pru to become his tutor and teach him this method.

I adore free-spirited Pru, who never seems to let herself be beaten down, no matter the circumstances.  She accepts her fate of being plain and poor, as well as being mocked by many of the other young ladies in town.  She joyously sings off color songs, and isn’t afraid to pursue a relationship with Nash when he becomes interested.  She never tries to make herself out to be something she’s not, and never hesitates to tell Nash the truth about her past or her circumstances, or even that she’s far from beautiful.  To Nash, however, she’s the most beautiful woman he’s ever known.  Something in Pru calls to Nash, making him want to live again, and even making him believe that he can do more than he ever imagined.  I love how Pru reassures Nash that physically, he is still devastatingly handsome, and how his touch makes Pru feel truly beautiful.

Glimpses of Nash in a previous book made me genuinely doubt that he could be redeemed, or, quite frankly, whether I would even care, as he struck me as that far gone.  In SWEET ROGUE OF MINE, I learned about his genuine torment over things he had done and how he was suffering with seemingly no way back to himself.  Shana Galen did such an excellent job of portraying a man on the edge, and how love arrived just in time.  Rowden is also a significant part of this story, working desperately to get Nash back to a state where he is fit to meet his father, and convince him that he’s capable of living on his own.  The new valet, Clopdon, is a gem, one who provides several smiles.  Of course, there is a villain, a spoiled, rejected suitor, who ends up getting just what he deserves.  SWEET ROGUE OF MINE is a lovely, steamy, and romantic read, one that I wholeheartedly recommend, with lead characters I loved.  It can be read as a standalone, but I do recommend the whole Survivors series for some of Shana Galen’s best writing ever.    ~Rose